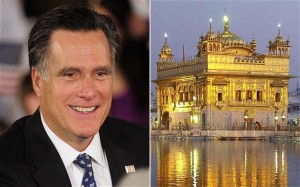 Washington DC: The State Department said today that Jay Leno has the right to make jokes about religions, even if they offend people in foreign countries, as did his Jan. 19 joke about GOP presidential hopeful Mitt Romney’s summer home being a famous Sikh temple.

The Indian Sikh community is in an uproar about the joke, in which Leno showed photos of the houses of GOP presidential contenders but replaced Mitt Romney’s summer house with a photo of the Golden Temple of Amritsar, the holiest temple in Sikhism, implying that Romney’s wealth has no limits. The Sikh community has called on its members to complain to NBC, started a petition to decry the joke, and created a “Boycott Jay Leno” Facebook group that has over 3,000 members.

“This is not the first time that this show host has targeted Sikhs in his monologue. Previously, in 2007 he called Sikhs ‘diaper heads.’ In 2010, he remarked, falsely so, in his monologue that President [Barack] Obama could not visit Sri Darbar Sahib because of requirements of wearing a turban. Clearly, Jay Leno’s racist comments need to be stopped right here,” the petition reads.

Overseas Indian Affairs Minister Vayalar Ravi told the BBC that the joke was “quite unfortunate and quite objectionable,” and called upon Nirupama Rao, the Indian ambassador to the United States, to bring up the issue with the State Department.

As of Monday afternoon, India had not lodged a formal complaint about the joke, State Department spokeswoman Victoria Nuland said at Monday’s press briefing. But she said that people can joke about whatever they want in the United States and it’s probably not an issue that concerns the U.S. government.

“I think that Mr. Leno would be appreciative — I hope he’ll be appreciative if we make the point that his comments are constitutionally protected in the United States under free speech, and frankly, they appeared to be satirical in nature,” Nuland said.

“But from a U.S. official government perspective, we have absolute respect for all the people of India, including Sikhs there. President Obama was the first president ever to host a celebration in honor of Guru Nanak Dev Ji, who’s the first Sikh guru, for example,” she said. “And you know, our view is obviously that Sikh Americans have contributed greatly to the United States.”