Washington:America,Harpreet Singh Saini, whose mother was one of six killed by a white supremacist in an attack on a Wisconsin Sikh temple in August, asked U.S. senators today at a subcommittee meeting to urge the FBI to track hate crimes against Sikhs motivated by religious bias.

“I just had my first day of college, and my mother wasn’t there to send me off,” Saini said. “She won’t be there at my graduation or my wedding day. I want to tell the gunman … you may be full of hate, but my mother was full of love.”

Saini pointed out that the FBI does not count the number of hate crimes against Sikhs specifically, instead lumping those attacks in the anti-Muslim hate-crime category. Sikhs, who adhere to a monotheistic faith that originated in South Asia, are often mistaken for Muslims because they wear turbans, and so have found themselves the victims of Muslim bias attacks. (A few days after the September 11 attacks, a Sikh gas-station worker was murdered by a man who was out for revenge against Muslims.)

“I came here today to ask the government to give my mother the dignity of being a statistic,” Saini said. “We cannot solve a problem we refuse to recognize.”

Some members of Congress are already seeking to pass a resolution asking the FBI to track anti-Sikh hate crimes.

Michael A. Clancy, a counterterrorism official at the FBI, testified that while the agency was aware that Wade Page, who allegedly killed himself after shooting the Sikhs, was a white supremacist, the FBI “never had any information that he posed a threat to any group, particularly the Sikhs.” 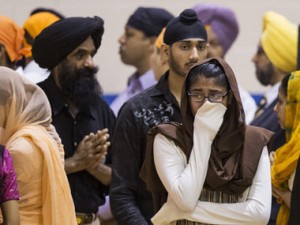 Previous: All set for Babe da viah
Next: Sikh heritage items set to go under the hammer in London