Amritsar, Punjab: Akal Takht Jathedar Giani Gurbachan Singh today said the draft of ‘Sikh Marriage Act — 2012’, prepared by Khalsa College principal Daljeet Singh, would be discussed in a meeting of the Sikh clergy and later forwarded to the Union Government through the SGPC. The aim was to get a complete marriage Act for the Sikh community. 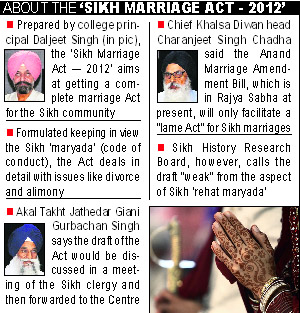 Addressing a seminar organised by the Chief Khalsa Diwan here today, the Jathedar said the draft should be widely circulated and also put on the internet so that the Sikh Sangat from across the world could access it and a debate be initiated on the issue. He said he will also talk to SGPC chief Avtar Singh Makkar to organise a meeting of Sikh intellectuals and legal luminaries, besides representatives of the DSGMC and the Punjab Government, to deliberate on the draft so that it could be further strengthened in all aspects.

Giani Gurbachan Singh said it was high time that the Sikh politicians rose above party lines and supported a complete Sikh marriage Act. He lauded Daljeet Singh for “bringing the Sikh community face to face with reality”.

Talking to mediapersons later, he rejected the amendment being made in the Anand Marriage Act 1909 while asking how could Parliament pass it without the consent of Sikhs.

Chief Khalsa Diwan president Charanjeet Singh Chadha said the Anand Marriage Amendment Bill 2012, which is in the Rajya Sabha, will only facilitate a “lame Act” for Sikh marriages. “We are aiming for a complete marriage Act as other minority communities like Muslims and Christians have,” he said.

Chadha urged the Jathedar to form a committee comprising Sikh intellectuals and legal experts to dwell on the draft and chalk out future course of action over the issue. The participants opined that the amendments being made in the Anand Marriage Act 1909 were not sufficient and were not as per the aspirations of the Sikhs.

While the Chief Khalsa Diwan had extended its full support to the draft, Sikh History Research Board director Roop Singh said the draft was “weak” from the aspect of Sikh ‘rehat maryada’ (code of conduct). He stressed on the need of defining a Sikh strictly on the basis of ‘rehat maryada’.

On the other hand, Dr Daljeet Singh attributed the inclusion of Sehajdharis as well as ‘Patits’ (apostates) in the definition of a Sikh in his draft to the fact that the blueprint prepared by him was based on inclusion theory. He said the draft had been prepared keeping in view the Sikh ‘maryada’ and thoroughly deal with several issues, including definition of Sikh and ‘Anand Karaj’, divorce, alimony and property rights and adoption. The draft does not touch the subject of gay marriages, which are prohibited under the Sikh traditions. Including another significant point, the draft says “no marriage among Sikhs shall be solemnised in any place other than a Sikh gurdwara”.