London, UK: Satkaar Campaign Sevadaars are pleased to inform the UK Sikh Sangat that Sri Akal Takhat Sahib has issued a further Aadesh (edict) which re-confirms that no anti Gurmat activities such as parties with meat and alcohol are permitted on any Gurdwara owned or related property. 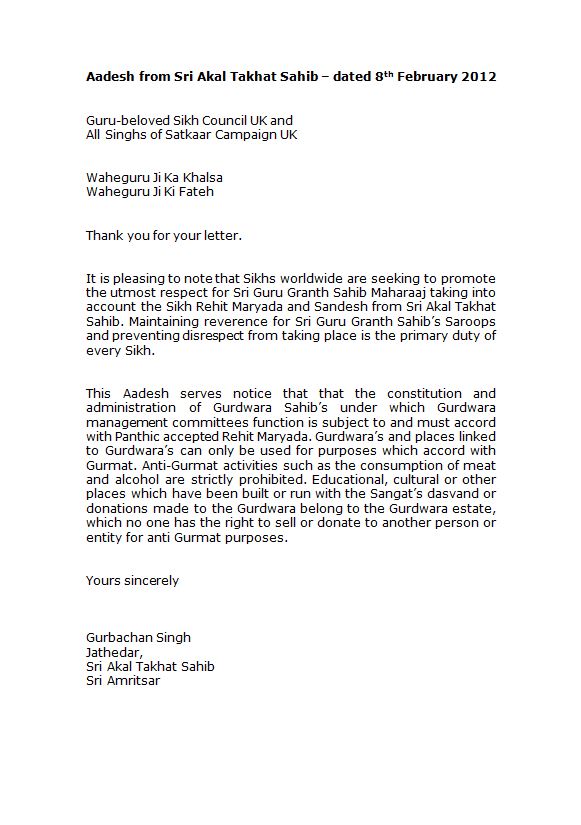 The Aadesh also confirms that all Gurdwara properties including educational, cultural or other places which have been built or run with the Sangat’s dasvand or donations made to the Gurdwara belong to the Gurdwara and cannot be sold or donated to another person or entity for anti Gurmat purposes.

The Aadesh further states that the constitution, administration and management of Gurdwara Sahib’s is subject to and must accord with Panthic accepted Rehit Maryada.

The original version in Punjabi signed by Jathedar Singh Sahib Giani Gurbachan Singh and its English translation is attached with this update and can be found on the Satkaar Campaign blog at http://www.satkaarcampaign.blogspot.com.

The Aadesh follows the unfortunate attempts by certain Gurdwara committees in the UK to justify the consumption of meat and alcohol in halls owned by those Gurdwaras by claiming the constitutions of those Gurdwaras permit such practices or by proposing to try to get around the issue by donating or selling at gross under-value those halls to third parties. Those Gurdwara committees believe that parties can continue to take place in their halls if they sell or donate them to some other organisation as they say the halls will have nothing further to do with the Gurdwara anymore as they will be owned by a separate organisation.

Even though the misuse of the Gurdwara’s Golak funds for such anti Gurmat actions would appear to any common Sikh to be clearly wrong, sadly certain Gurdwara committees are contemplating selling their halls to non Sikh organisations for gross undervalue or even gifting them away for free. What this would mean is that the Sangat’s money that has been donated to the Gurdwara will in effect be used to permanently subsidise meat and alcohol parties at the expense of the Sangat.

Satkaar Campaign Sevadaars will be forwarding a copy of the Aadesh to Gurdwara’s across the country. The Aadesh is a binding directive on Gurmat Maryada from the Akal Takhat and all offending Gurdwara management committees need to take immediate steps to comply with its terms and stop the gross sacrilege of parties with meat and alcohol on Gurdwara premises. Further steps also need to be taken as necessary to amend Gurdwara constitutions to remove all offending passages within such governance documents which must clearly stipulate that anti-Gurmat practices are prohibited in all properties belonging or related to the Gurdwara. To any Gurdwara committee that is proposing to sell or donate their hall or centre to some other entity to continue parties our message is clear: you cannot do this. We shall have no option but to report non compliance with this Aadesh by Gurdwara committees to the Akal Takhat for further action.

We humbly request all Gurdwara’s, Gurdwara Councils, Jathebandees and other Sikh organizations to work together on a local and national level as necessary to implement this Aadesh and eradicate gross anti Gurmat practices from our Gurdwara’s. As the Akal Takhat itself stipulates in the Aadesh, maintaining Satkaar for Sri Guru Granth Sahib Maharaaj and preventing beadbi from taking place is the primary duty of every Sikh.

We are wholeheartedly thankful and welcome the support and encouragement from Sevadaars of Sikh Council UK in the matter of the Aadesh from Sri Akal Takhat Sahib. As the leading umbrella Sikh organisation representing the UK Sikh Sangat nationally and internationally, the Satkaar Campaign looks up to the Sikh Council in this regard and we wish to continue working hand-in-hand with the SCUK to promote Satkaar for Sri Guru Granth Sahib Ji Maharaaj.

What’s been happening with the Satkaar Campaign in the past few months?

A few months have passed since our last update but the Sangat can be rest assured that with its blessings, the Sevadaars have continued to work on raising awareness of Satkaar for Sri Guru Granth Sahib Ji. In the past few months two further Gurdwaras committees have stopped meat and alcohol being served on their Gurdwara premises. In these Gurdwaras, whilst the Satkaar Campaign Sevadaars were involved in liaising with and supporting the local Sangat, it was the local Sangat that took the lead and initiative to stop the abuse of Gurdwara property occurring. We are very pleased and encouraged that Sangat across the UK is now becoming aware of, and acting upon, their obligation to uphold Satkaar of Guru Sahib Ji’s Saroops and Gurmat Maryada. Whilst we would like to disclose the location of these two Gurdwaras, local Sangat have requested us to refrain from doing so due to ongoing local sensitivities on this issue.

Altogether, with Guru Sahib Ji’s blessings and the continued support of the Sangat, to date, seven Gurdwara’s have stopped meat, alcohol, tobacco, dancing and parties at halls owned by or linked to such Gurdwara’s over the last 16 months following the inception of the Satkaar Campaign. Also, we understand that three Gurdwara’s that were planning to fund new party halls with Guru Sahib Ji’s Golak have refrained from doing so. Satkaar Campaign Sevadaars will continue working positively with all Sikh communities to PEACEFULLY eradicate the consumption of meat and alcohol from the now few remaining Gurdwara premises throughout the country.

The Satkaar Campaign is a UK Sangat-led movement whose initial focus has been to raise awareness of the gross sacrilege that a small minority of Gurdwara committees in the UK are continuing to commit by permitting the consumption of meat and alcohol on Gurdwara owned or related premises. The Satkaar Campaign Sevadaars remain committed to continue raising awareness on this issue and our aim is to put a permanent end to such beadbi taking place in our Gurdwara’s in the UK. However, the Sangat may be aware that Sevadaars have repeatedly been requested and/or felt morally obliged to intervene in others matters besides party halls relating to Satkaar of Guru Granth Sahib Ji where the Sevadaars have been recently active. We will be providing further information on these matters and proposed new initiatives in the coming weeks.

2012-02-15
SSNews
Previous: Simranjit Mann protesting against Ahluwalia
Next: The traditional view about the Sri Dasam Granth Sahib –‘The Global Vision of Guru Gobind Singh that is’ – A rejoinder to IJ Singh: ‘Sikhi: The Global Vision That Was’