SAD party workers in a rally against Pawan Teenu in Adampur. (Dec, 2011) 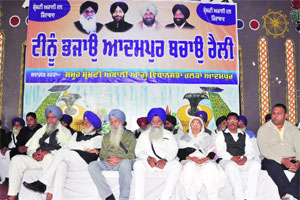 SAD party workers in a rally against Pawan Teenu in Adampur. (Dec, 2011)

Jalandhar, Punjab: The Shiromani Akali Dal leaders who have revolted against candidature of Pawan Teenu from Adampur have not won the support of several Sikh religious organizations. Many religious leaders would now take up the issue with chief minister Parkash Singh Badal and Shiromani Akali Dal president Sukhbir Badal to ask them to replace Teenu.

Ghosts of around nine years old Talhan episode are out to haunt Teenu, who was then a BSP leader and was in the front line against Sikhs regarding control of Talhan Gurdwara. The SAD leaders and activists led by Adampur market committee chairman Gurdial Singh Kalra and MC presidenr Darshan Singh Karwal met Damdami Taksal chief “Dhuma”.

Kalra said they had given all the proofs of Teenu’s anti-Sikh statements and activities to Dhuma. The faction opposed to Teenu is going to the extent of comparing Teenu’s candidature with that of Congress leader Sajjan Kumar about which SAD had been raising hue and cry. “Why should a person who indulged in anti-Sikh activities be honoured with a ticket, if SAD had been objecting to Sajjan’s candidature by Congress,” Kalra said to Dhuma and later reiterated it to the media. This section of SAD leaders has also conveyed it to Dhuma that if Teenu would not be replaced they would field an independent candidate.

Notably, Damdami Taksal had become a party in the Talhan dispute and it extended full support to the Sikhs on the ground that only practicing Sikhs, irrespective of their caste, be adjusted in the gurdwara management and not any clean shaven persons. When the dispute was solved the negotiations were also conducted by the leader owing allegiance to Taksal.

However, rubbishing the allegations, Pawan Teenu said a factional issue was being given casteist colour for vested political and personal interests, which was very unfortunate. He said canards were being spread against him as he had never given any anti-Sikh speech or taken part in its activities. “Our fight was against the Captain Amarinder Singh-led Congress government and not against any community,” he added.