Wisconsin, US: Former soldier Wade Michael Page was identified today as the lone gunman who killed six people at a Sikh religious center in Oak Creek, Wisc., but police said they are also seeking a “person of interest” who was seen at the site of the massacre shortly after the shooting stopped.

Page was described by authorities today as an Army veteran who left the service with a general discharge following a “pattern of misconduct,” including being AWOL and drunk while on duty. The terms of his discharge would not allow him to reenlist.

Officials said they believe Page alone was responsible for Sunday’s shooting, but today distributed a photograph of an unknown man they described as “person of interest.” 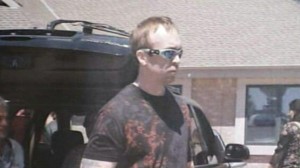 The “person of interest” in the Sikh temple shooting as identified by authorities.

“This individual showed up at the scene after the shooting,” said Oak Creek Police Chief John Edwards. Witnesses said the man looked “suspicious” and he “left the scene before anyone could ascertain what he was doing there.”

Page, 40, served in the Army from April 1992 through October 1998, during which he was demoted from sergeant to specialist.

The ex-soldier is believed to be the gunman who opened fire on people at the Sikh temple around 10:30 a.m. Sunday morning and killed six people. The victims ranged in age from 39 to 84.

Page was shot dead by police when he was ordered to drop his weapon and began firing at them instead.

Police have not given any details on the motive of the shooter, but Teresa Carlson, the FBI’s special agent in charge, said today, “We are looking at ties to white supremacist groups.”

SPLC also determined that in 2000, Page attempted to purchase goods from the neo-Nazi group the National Alliance, described as America’s then “most important hate group.”

In 2010, Page gave an interview to white-power website Label 56. Page wrote songs with titles like “Self Destruct” and “Usefull [sic] Idiots.”

“The inspiration was based on frustration that we have the potential to accomplish so much more as individuals and a society in whole,” Page told Label 56.

Carlson and other officials said investigators had no “reason to believe” Page was planning Sunday’s attack.

“We didn’t have an active investigation into him prior to yesterday,” she told reporters today.

On Sunday the FBI and a bomb squad arrived at a home in Cudahy, Wis., near Oak Creek, and ABC News Milwaukee affiliate WISN reported the action appeared to be related to the temple shootings earlier in the day.

Edwards said authorities were treating the event as a domestic terrorism incident and the FBI would be conducting a full investigation.

Individuals attending Sunday services at the Sikh Temple of Wisconsin, just south of Milwaukee, fled in all directions this morning when a gunman entered and began firing. Many hid in bathrooms or other rooms within the temple while the shooter attacked, according to police.

The president of the temple, Satwant Singh Kaleka, was preparing to deliver remarks when he became one of the shooting victims. His son, Amardeep Kaleka, spoke by phone with ABC News shortly after getting a call from the priest using his father’s phone.

“I picked it up immediately thinking it was my dad, but it was the priest and he was standing right next to him,” Kaleka said. “He told me right away that right now my father can’t speak. There’s too much blood coming out of his back area and we have to get ambulances in there right away.”

Soon, he heard briefly from his mother, also in hiding in the temple and asking for information about his father.

Members of the Sikh community in Milwaukee expressed outrage at the shooting.

“They went to church not knowing that they might die today,” said Simran Kaleka, whose family was in the temple, according to ABC News Radio. “I don’t know how sick you have to be to do that, and I don’t know if it was directed toward the Sikh culture and them having turbans and having beards, but ignorance is not going to get us anywhere.”

The wounded president of the temple, Satwant Singh Kaleka, had recently hosted state Rep. Josh Zepnick and the county district attorney to discuss a recent rise in violence against area Sikhs at their stores and businesses, according to the Milwaukee Journal Sentinel.

“It’s gut wrenching,” Zepnick said today in response to the shooting. “It certainly makes you wonder about how just how far this epidemic of gun violence goes, where innocent people’s lives are put at risk in ordinary day-to-day situations. it makes me sick to my stomach.”

On Sundays, Sikh temples, called gurudwaras, serve a community meal at which anyone is welcome as part of their community service. The meal, known as a langar, follows the morning services.

The Sikh religion originated in the Punjab region of India.