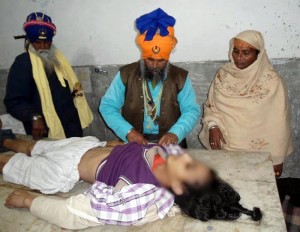 Barnala, Punjab: Reports from Punjab have confirmed the death of 17 year old Veer Singh ‘Heera’ while in police custody today.

According to Veer Singh’s family, their son was arrested and taken into custody for questioning by Inspector Rajesh Sunehi and 20 others on the afternoon of the 8th. The family claimed that they received no news of his whereabouts until the morning of the 9th when an unknown individual named ‘Mangat Singh’ dropped Veer Singh’s corpse off at the Barnala civil hospital.

Responding to the family’s allegations that Veer Singh was tortured and killed in police custody, Inspector Sunehi plead ignorance. According to the police, the 17 year old youth was taken to a railway station and released the same night of his arrest and suspicious death.

The court appointed magistrate, Jaswant Rai has since taken statements from all parties involved and said that appropriate action would be taken once results from the postmortem report are made public.

The Punjab Police, notorious for it’s human rights violations, was responsible for using brutal methods to crush the Sikh Independence Movement in the 80’s and early 90’s. According to Amnesty International, “thousands of ‘disappearances‘ or extrajudicial executions were allegedly carried out by the police as part of a deliberate policy to eliminate armed opposition groups as well as their supporters.” Despite the end of militancy, extrajudicial executions and disappearances have not stopped in Punjab. The examples of Shaminder Singh Shera and Sohan Singh who were tortured and killed in police custody in 2011 are ample evidence of this fact.

Reacting to the allegations of custodial murder, Moninder Singh, spokesperson of the CSC, demanded that an independent investigation take place to apprehend Veer Singh’s murderers and punish them accordingly. He went on to say that, “corruption, a lack of accountability, and discriminatory policies and tendencies against minorities breed a culture of impunity within India’s security forces. It is this culture that encourages police officers to torture and kill innocent people.”