UK, A DERBY worshipper will represent the UK’s 500,000 Sikhs at a remembrance festival at London’s Royal Albert Hall, in front of the Queen.

Jaz Rai was invited to attend the special event, on November 10, by the Royal British Legion.

It comes after he and his cousin, Kalwinder Singh Dhindsa, designed a Sikh Khanda holder that raised hundreds of pounds for the charity’s poppy appeal.

The Normanton men said they felt compelled to create the unique item in 2010 to honour soldiers from their religion who gave their lives in the two world wars.

After a visit to the National Memorial Arboretum in Alrewas, Mr Rai and Mr Dhindsa found that despite poppy holders commemorating several different faiths, there was not one which represented Sikhism.

So they went back home, designed their own and received requests for the holder from Sikhs across the UK.

Mr Rai, a committee member at the Guru Arjan Dev temple, in Stanhope Street, said it was the success of the holders that had led to his invite to the Festival of Remembrance, which will be broadcast live on BBC1.

He said: “I’m very honoured, firstly to be asked to represent my community and, secondly, to be recognised for doing the poppy holders.

“I didn’t do it for the recognition but to be recognised makes me feel very honoured.

“I don’t know if I will get to meet the Queen but, certainly, she will be there.

“It’s very exciting. I’ve not been to the Royal Albert Hall before but I know it is impressive.”

The wooden holder is designed around the shape of the Khanda – a broadsword which is a prominent symbol of Sikhism – and features, at its centre, one of the famous poppies which are worn to mark Remembrance Day on November 11.

Mr Rai said: “That sword has two edges, one which represents spirituality, the other which indicates justice.

“It can be put in the ground as a commemorative marker or put somewhere at home.

“When we went to the National Memorial Arboretum they had poppies for other faiths but not for Sikhs.

“We were concerned about it because over 80,000 Sikhs died in the First and Second World Wars but there was nothing there to recognise their contribution. We felt it was an injustice.”

Government ministers and the public will also attend the Festival of Remembrance. 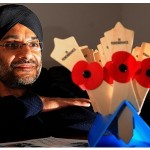