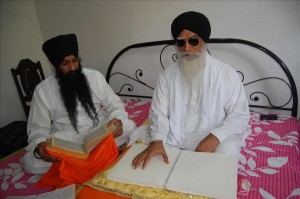 Bhai Gurmej Singh Ji has made his dream and the dreams of thousands of others come true. The release of Sri Guru Granth Sahib Ji in Braille language at Sri Guru Ram Das Ji Gurpurab in Amritsar on October 9 was one of the most important events in the Sikh calendar and in the history of Sikhism.

Visually impaired people will now be able to get the ‘true vision’ themselves and read the Holy scriptures of the Sikhs given by Guru Nanak Dev Ji. Gurmej Ji has worked hard, focusing on this project for the past ten years.

Countless nights without sleep and continuous proofreading enabled him to reach the goal that he had set for himself in the retiring years of his life.

Whenever visually impaired persons take time to enjoy the greatness of Sri Guru Granth Sahib, they will remember and bless the tireless author.

Gurmej Ji has been visually impaired since he was nine years old.

He has done service for over 28 years at Sri Harminder Sahib in Amritsar, popularly known as the ‘Golden Temple.’ He studied at an Amritsar college founded by Bhai Veer Singh for the benefit of the disabled and visually impaired.

He was keen that children with special needs make use of their lives and to be as independent as possible and be gainfully employed.

Such children were taught not only to read and write Braille, but also to do simple jobs such as looking after themselves. The courses included lessons on music as well.

Gurmej Ji succeeded in music and was employed at the age of 17 at the Dehradun Gurdwara for kirtans. He was a regular visitor to the biggest Braille press located in that City and worked with the people concerned to complete some small parts of Gurbani.

He has dedicated all his life for the community in order that people could have opportunities that were unavailable to him.

A man of great learning, Gurmej Ji is respected by people (including those of the older generation) for his unique style of rendering Kirtans.

He is renowned for reciting most Shabads from memory, a rare feat at the Golden Temple and at Gurdwaras. The late Sardar Swaran Singh, affectionately known as ‘Daddy Ji’ in Auckland, was Gurmej Ji’s uncle, whose family has helped in the project.

Copies of the publication are now being donated to different institutes in India. Gurmej Ji has also kept in mind two visually impaired New Zealand born twins. He is planning to visit New Zealand soon to gift the Braille Edition to them.

New Zealand will be among the few fortunate countries in the world that would have Sri Guru Granth Sahib in Braille.

The Braille edition of Sri Guru Granth Sahib is divided into 18 parts and Gurmej has taken care to ensure that it is a true version of the normal edition. This was achieved with the help of his family that lives in New Zealand.