Ludhiana,Punjab:According to media reports the fire crews and agents from the ATF and FBI remain on the scene of a large overnight fire that destroyed a “Sikh Temple” Gurudwara in Vancouver, Washington state early October 12, 2012 morning.

As per reprots the blaze was reported shortly after 2:25 a.m. in the 13400-block of Northeast 20th Street and Village Green Drive, just west of Evergreen High School, reported The Oregonian. Two construction workers staying in the building, formerly the Landover Athletic Club, were awoken by the fire. The men got out safely.

The gymnasium was used as a place of worship while being renovated, said Kevin Murray, a spokesman for the local Fire Department.

The Bureau of Alcohol, Tobacco, Firearms and Explosives and Federal Bureau of Investigation routinely investigate fires at places of worship, Murray said.

It was too soon to know whether the blaze was suspicious, he said.

In August, a gunman entered a Sikh Temple suburban Milwaukee and opened fire. Six people died and three were wounded before a police officer killed the gunman.

County records show the building is owned by the Guru Ram Dass Gurudwara Sikh community and was valued at more than $231,000. 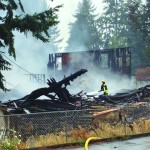