Amritsar, Punjab: Akal Takht Jathedar Giani Gurbachan Singh’s move to support a complete Sikh marriage Act has sparked a major controversy with the SGPC, DSGMC and Sikh intellectuals taking a conflicting stand. They said amendments being made in the Anand Marriage Act 1909 should be allowed to be passed while a complete Act could follow later. However, the Jathedar has also found support from a section of the Sikh community. 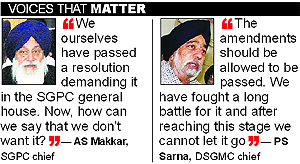 SGPC chief Avtar Singh Makkar said: “We ourselves have passed a resolution demanding it in the SGPC general house. Now, how can we say that we don’t want it?” He said first these amendments should be allowed to be passed while the rest of the issues may be addressed later. Makkar is likely to hold a meeting with the Jathedar soon to discuss the issue. DSGMC chief Paramjit Singh Sarna also said the amendments should be allowed to be passed. “We have fought a long battle for it and after reaching this stage we cannot let it go,” he said. Sarna said if the community faced any problem later, the SGPC and the DSGMC can jointly form a committee of experts to pursue further amendments.

Former Rajya Sabha MP Tarlochan Singh, who played a key role in pushing these amendments, said, “It will be a major achievement and nobody should try to scuttle it at this stage. Those advocating a complete Act should have raised their voice earlier.”

Sikh intellectual Balkar Singh said the Jathedar had created confusion among the community by “speaking on the issue without giving it a thought”. He said only the political class stands to benefit if the amendments in the Anand Marriage Act 1909 were stopped. He said the amendments will pave the way for the recognition of Sikhs as a separate community and the issue of a complete marriage Act can be negotiated at a later stage.

Noted Sikh scholar Bhai Ashok Singh Bagrian said the community should let these amendments take place as it was achieving the purpose of establishment of separate identity of Sikhs. He said the Sikhs have long been demanding these amendments and nobody talked about divorce during this period. He also dubbed the Jathedar’s move as a “step in haste”.

Supreme Court lawyer HS Phoolka said the entire Sikh community had been demanding these amendments for the last seven to eight years. He said the “somersault made by the Akal Takht Jathedar will make a mockery of Sikhs in Parliament”. “Everyone wants registration of Sikh marriages under a separate Act and these amendments are serving the purpose. Putting these amendments in jeopardy for a complete Act is not a wise decision,” he said.