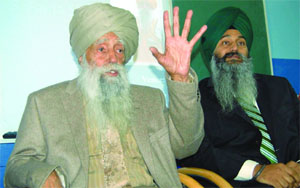 Centenarian marathoner Fauja Singh is an inspiration for others.

Amritsar, Punjab: At a modest 5 ft 8 inches tall, he is a giant in the world of marathon history. For someone who couldn’t barely walk at the age of five, running a marathon and breaking world records at the age of 100 is a feat worth celebrating.

But Fauja Singh takes it as a pleasant ‘surprise’. “Every day I feel surprised at my feats and wonder how I was able to do it?” If that’s not being humble then his recently released biography, Turbaned Tornado by Khushwant Singh, is a must read. The British centenarian marathon runner of Indian origin, Fauja Singh is not just a sportsperson but an inspiration world over.

In Amritsar on a personal visit to International Fateh Academy, the running sensation, a marathon runner for all seasons and turbaned tornado (all his popular nicknames) shared doses from his life and his biography. “I was quite weak in my childhood and could barely walk. People used to call me ‘stick’ and never in my life I had thought that I would become famous,” says the marathoner, who survived on nothing but faith and positivity. That’s why he mentions in his biography, “Perhaps it was the Almighty’s way of preserving my legs for later years.”

Running started as an escape for him after the loss of his wife and son. At 90, he set the world record for the men’s over-90 marathon run in five hours and 40 minutes, which shot him to international fame and later repeated the records in the 100m, 200m, 400m, 800m, 1,500m, 3,000m and 5,000m. Recently this year, at 100, he created another astonishing human legend by successfully completing the Scotiabank Toronto Waterfront Marathon running the 26.2-mile marathon in 8 hours 25 minutes and 16 seconds. With this he entered the Guinness World Record in his age category as the first human being to accomplish the gruelling feat. What motivates him? “I run while talking to God.”

For someone whose enthusiasm for life, running and healthy living is infectious and a model for all, Fauja Singh doesn’t even remember most of his feats. But one thing he sure knows, “I take care of my health. My trainer Harminder has put all his efforts to keep me going.” He runs 10 miles a day, loves gorging on alsi ki pinni, milk and kanak da parshad twice a day (which he says is his secret to fitness) and stays away from junk food. Also, “I don’t feel I am that old. I have friends who are as young as ten years old, and I am happy that I have my peace of mind,” says the runner who could go for a ten mile run even at 2 in the morning.

He has proved his mettle world over but Fauja Singh is yet to run a marathon in India. “I would love to participate if invited.” Being a Punjabi, he finds himself in a tight spot when asked about the status of sports in Punjab, “We have such talented sportspersons, but the lack of promotion and drug abuse marr their core. I don’t have an answer to it.”

Meanwhile, he keeps himself busy running for himself and his humanitarian causes.