Delhi,india:What happens when defenders of a nation become ‘enemies’ in the eyes of its government? What happens to ordinary people forced to choose between their religion and their country? Militancy throws up such questions all over the world.

The Sikh militancy that rocked the nation 25 years ago may be a closed chapter for the government and for most Indians but people who have witnessed it are still suffering in silence. Amandeep Sandhu’s novel “Roll of Honour” is set in the 1980s when the Indian government had decided to crush Sikh militants demanding a separate country.

Himself a Sikh, Sandhu went to school during the height of militancy in Punjab. He narrates the story from the perspective of ordinary people caught in the crossfire. “Roll of Honour” is about young boys who grew up watching the horrors unfold.

The poignant story is told through the eyes of a 16-year-old student at a military school in the imaginary town of Jassabad in Punjab. Sikh militancy, led by Bhindranwale, is at its peak. Teenage students witness violence from close quarters. Some Sikh students back Bhindranwale and are ready to take up arms against the very army they once wanted to serve.

Appu watches these developments with shock. His young mind is torn between his commitment to his father in a low paying job, his mentally ill mother, and the duty of a Sikh to defend his faith. His school has many things to hide. Some boys sodomise their mild-mannered classmates and juniors. Teachers don’t understand why their students are disturbed. They believe only in enforcing discipline as they know it.

After Operation Bluestar and the death of Bhindranwale at the hands of the Indian Army, the anger spills over. A pro-Khalistan student hides in the school with the help of a few friends who sympathise with the cause.

Appu’s adolescent mind does not understand why and how ordinary people become ‘collateral damage’. In his anxiety to make sense of it all, he even visits Delhi to get first-hand information about the anti-Sikh riots after the assassination of Prime Minister Indira Gandhi.

Sandhu tells this story lucidly. He draws no conclusions, gives no sermons and offers no solutions. He refrains from turning the story into a tearjerker.

Some chapters have subtitles from WB Yeats’ “The Second Coming”. Readers familiar with the Irish poet and his passionate literary role in the struggle of his people will surely wonder if the novelist is trying to compare his own state of mind to that of Yeats during the Irish revolution.

‘Roll of Honour’ is an evocative novel. You keep thinking about it even days after you have finished reading it. I hope it gets translated into Indian languages, including Punjabi. Sandhu is a fine story teller, and a chronicler of our contemporary tragedies. 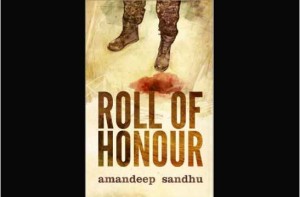 Tagged with: 'Roll of Honour' Sikh boy's poignant tale of the militancy years