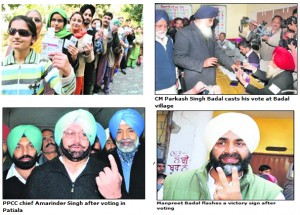 Chandigarh, Punjab: The electorate in Punjab came out to vote overwhelmingly for the 117-seat Assembly elections today with 76.63 per cent (preliminary estimate) of the 1.76 crore voters exercising their franchise.

This is the highest figure since the state was reorganized in 1966, Election Commission sources said.

Barring sporadic incidents of violence that left a youth dead and some people injured, polling in this once militancy-ridden border state was largely peaceful with no report of booth capturing.

Chief Electoral Officer Kusumjit Sidhu said she did not find any reason for a re-poll, but a decision would be taken after reports from returning officers.

The turnout this time marginally exceeded the last Assembly poll percentage (75.47 per cent) and was far more than the 2002 elections (65.14 per cent).

Ferozepur SSP Hardial Singh Mann said the man died allegedly after Laddi Gehri, husband of Congress candidate from the constituency, Satkar Kaur, opened two rounds of fire. Nishan Singh, said to be an SAD worker, was killed in the firing, said the SSP.

“The incident occurred about 200 metres from the polling station,” said the SSP, adding one person had been arrested in the case.

A sitting SAD MLA from Ajnala, Amarpal Singh Bony, was booked for allegedly manhandling a media person while he was collecting information about turnout of voters from a polling station.

Some more incidents of violence were reported from Ludhiana, Mohali, Abohar, Nabha, Amritsar, Tarn Taran and Moga following which cases have been registered under various sections of the IPC.

Kusumjit Sidhu said nine FIRs had been registered in various districts, all relating to minor scuffles between rival groups. She said that an elderly woman, who had come to cast her vote, collapsed in a polling station at Anandpur Sahib reportedly due to a heart attack.

Voting started at 8 am across 19,841 polling stations in the state. Initially, the turnout was low but gathered pace after 11 am. By noon, the state had recorded 35 per cent polling.

The maximum turnout was witnessed in the southern parts of the state with all the districts crossing the 80 per cent mark. This included Sangrur (83 per cent), Muktsar (82 per cent), Ferozepur (82 per cent), Mansa (82) and Bathinda (80 per cent). While PPP supremo Manpreet Badal’s Gidderbaha constituency witnessed 88 per cent polling, that of Chief Minister, Parkash Singh Badal’s Lambi segment recorded 86 per cent. Congress party’s Chief Minister-aspirant Capt Amarinder Singh’s Patiala (city) recorded 73 per cent voting while Deputy Chief Minister Sukhbir Badal’s Jalalabad constituency recorded a poll percentage of 82.

Despite the winter chill, some polling booths, especially in rural areas, saw people queuing up even before the polling began. No voter was allowed to enter the polling station without an election identity card and voter slip, EC officials said. The fate of 1,078 candidates, including 417 Independents and 93 women, will be decided on March 6.

Sidhu said six TV channels and three newspapers had been issued notices for violating the code of conduct on the polling day.

In Malwa hotbed, people poured out to vote with all districts recording nearly 80% turnout (highest in Guru Harsahai in Ferozepur). Sporadic violence, however, marred the mood with a youth dying in a clash in Ferozepur and clashes being reported in Malerkotla and high-profile Gidderbaha segments. Booth number 106 in Badal village in Lambi was the centre of attraction as all rival members of the Badal clan came out to vote there.

The high-profile Doaba belt remained the calmest with voters seen outside the booths as early as 8 am. While the highest polling percentage was recorded in Bholath segment (81 per cent), Jalandhar West saw lowest turnout of 68 per cent. There were reports of some EVMs going out of order and names of people being deleted from the voters’ list. In Nawanshahr, women voters outnumbered their male counterparts.

Minor skirmishes did not deter voters in the Majha region from queuing up at polling booths in large numbers. The Amritsar (West) constituency recorded the lowest turnout (just 56 per cent) in the state. While clashes were reported in Amritsar and Tarn Taran districts, SAD MLA Amarpal Singh Bony was booked for manhandling of a mediaperson at a booth. EVMs developed snags in Tarn Taran and Khadoor Sahib.