New Delhi, India: Indian Prime Minister Manmohan Singh voiced shock Monday at the killing of worshippers at a Sikh temple in the US, while Sikh leaders suggested American Muslims may have been the intended target.

“I am deeply shocked and saddened to learn of the shooting incident that has resulted in the loss of precious lives,” Singh, himself a Sikh, said in a statement. 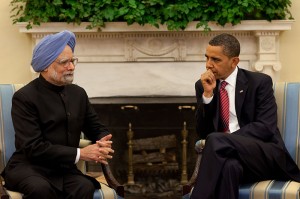 “That this senseless act of violence should be targeted at a place of religious worship is particularly painful.”

In Sunday’s attack, a gunman shot worshippers at a suburban Sikh temple in Wisconsin, in the mid-western United States, killing at least six people before he was shot dead by police.

“I hope the American authorities would investigate who is behind this dastardly attack on innocent devotees and that they will ensure that such ghastly events do not take place,” Singh told reporters later.

According to religious tradition, Sikh wears turban to cover their uncut hair and sport long beards.

In the United States they have often been mistaken for Muslims and have been targeted by anti-Islam activists, particularly after the September 11, 2001 attacks.

“I think it is a case of mistaken identity. Sikhs are often mistaken to be from the Middle East,” said Manpreet Singh Badal, founder-president of People’s Party of Punjab.

“America is a place where you have the occasional loony, the misguided lot, firing randomly at vulnerable people,” he told AFP.

“This is an opportunity, although a very sad one, to raise awareness among Americans about the Sikh culture and identity.”

Manjit Singh, president of a Delhi-based Sikh party, said a peaceful gathering would be held later Monday outside the US Embassy in New Delhi as a demonstration of solidarity with the victims.

“Sikhs contribute a lot to America, they are an important part of America,” Singh said.

“This is a racially motivated case and the (US) government needs to educate people about different communities so it doesn’t happen again,” he said.

The US Embassy said it was deeply saddened by the “senseless loss of lives” and praised the American Sikh community — estimated to number between 500,000 and 700,000 — as one that “meaningfully enhances” the American social fabric.

“The United States takes very seriously the responsibility to respect and protect people of all faiths,” it said in a statement.

In the northern Indian city of Amritsar, home to Sikhdom’s holiest shrine, the Golden Temple, Sikh religious leaders called on all Sikhs in the United States to “remain vigilant”.

“This is a security lapse on the part of US government wherein Sikhs have become the victims of violence,” said Giani Gurbachan Singh, head priest at the Akal Takht, Sikhdom’s highest seat of religious and temporal authority.

Singh said a “chain of prayers” would be held in Sikh temples across India, including the Golden Temple, for those who died and for the recovery of the injured.