Oak Creek,Wisconsin:All of India shares the pain of Wisconsin Sikhs as they grapple with the aftermath of a mass shooting at a suburban Milwaukee temple, the country’s foreign minister said on Thursday during a visit to the temple.

SM Krishna, India’s external affairs minister, Nirupama Rao, the country’s ambassador to the United States, and Dutta Toma, counsel general of India in Chicago, toured the temple in Oak Creek for about an hour and half. Krishna addressed about 150 Sikhs in the temple’s hall, reassuring them that the Indian government and its people were behind them. The Sikh faith has roughly 27 million followers worldwide, and the vast majority live in India.

The Sikh community is still struggling to come to grips with the shocking attack on August 5. Wade Michael Page, a 40-year-old Army veteran and white supremacist, arrived at the temple before Sunday services and opened fire with a 9 mm handgun. He killed six worshippers and injured three others. He also wounded police Lt Brian Murphy as the officer responded to the scene. Page killed himself minutes later, after he was wounded in a firefight with another officer.

Page’s motives remain unclear. The FBI declared the attack an act of domestic terrorism but is still investigating what drove Page and whether he had any help. Milwaukee FBI spokesman Leonard Peace said on Thursday that probe is still ongoing and declined further comment.

Sikhs contend they’re often mistaken for Muslims because they wear beards and turbans. Temple members pushed the US Senate Judiciary Committee at a hearing last month to start collecting data on hate crimes against Sikhs.

Still, reminders of the shooting were everywhere in the temple on Thursday. Banners signed by hundreds of well-wishers plastered the walls. A piece of paper with the direct number to the Oak Creek Police Department hung on a bulletin board, and an armed private security guard patrolled the parking lot. 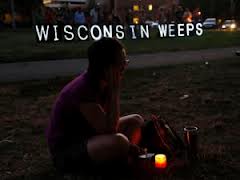 Previous: When hundreds of Sikhs lost their homes in Orakzai
Next: SM Krishna meets US gurduwara shooting victims