He said as per government records, around 3000 people were killed in 1984 anti Sikh riots in 48 hours which counts to one killing in less than a minute and not a single punishment given to the culprits for last 28 years.

He said the youth of today had decided to start the campaign “Forgotten Citizens” where many organizations pledged to fight for the injustice done to Sikhs. “Through Forgotten Citizens, we plan to request Government to provide justice to them who lost their families in Delhi 1984 riots” he said.

The campaign would go to cities like Sultanpur Lodhi, Jalandhar, Ludhiana, Chandigarh displaying mobile picture exhibition on 1984 Carnage. The campaign would reach Delhi on October 28. “On 3rd November, 3 PM we plan to move together from Jantar Mantar to Parliament House and submit our memorandum/petition to Prime Minister of India” said Phoolka. 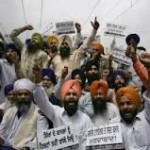