Sangrur,Punjab: The Wadda Ghallughara memorial at village Kup Rohira here, which was inaugurated 10 months back in November 2011 by chief minister Parkash Singh Badal, has still not been opened to public because of incomplete construction. Taking a serious note of the tardy work at the site, deputy commissioner (DC) Kumar Rahul has instructed officials concerned to complete the work at the earliest.

The DC, however, informed that the work is in its last leg and the authorities are hopeful of opening the memorial to public in the coming months.

As per information, the construction is almost complete and finishing touched are being given to the information centre and the auditorium here. The DC said metal detectors and close-circuit cameras would be installed in and around the memorial and besides private security, Punjab police personnel will also be deployed at the site.

The work at Wadda Ghallughara memorial, one of the four Sikh monuments constructed by the SAD government in its bid to take the heritage route to assembly polls, is said to be incomplete owing to shortage of funds.

The memorial is a tribute to the 30,000 Sikhs who attained martyrdom in a fierce battle with the army of over a lakh soldiers led by Mughal emperor Ahmed Shah Abdali in Kup Rohira on February 5, 1762.

Khalsa Heritage Complex at Anandpur Sahib, Chhota Ghallughara at Gurdaspur and Banda Bahadur memorial at Chappar Chiri are the other three Sikh memorials which were inaugurated last year. 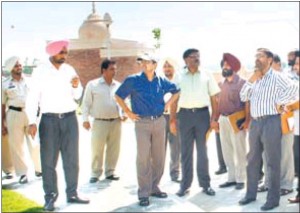 Previous: Rowling gives starring role to Sikh family in new novel
Next: JK Rowling did ‘vast research’ on Sikhism for ‘The Casual Vacancy’