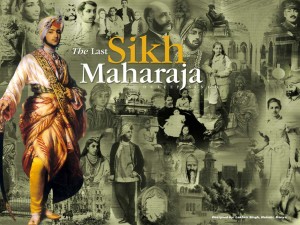 Amritsar, Punjab: The Scottish surgeon who was appointed as guardian to Maharaja Dalip Singh was not above trying to feather his own nest at the Maharaja’s expense. Newly released documents show that Dr John Login tried and failed to persuade the East India Company to give him a £1,000 annuity from the personal privy purse of the deposed Maharaja.

In terms of present day values measured by average earnings, this amounted to more than £600,000 per annum.

Login was appointed as Dalip Singh’s guardian in 1849 shortly after the Second Anglo Sikh war. At the time, the young Maharaja and son of the legendary Maharaja Ranjit Singh was only 11-year old.

Login’s controversial duties at the time included taking charge of Dalip Singh’s impressive legacy, including land, palaces and, most importantly, the legendary Kohinoor diamond which was presented to Queen Victoria.

The 186 carat diamond, a prized asset of the Mughal dynasty, was said to be the size of a large egg. Victoria sent it to diamond cutters in Amsterdam who re-shaped and reduced the gem to 108.9 carats before it was placed on the imperial crown.

Login was Dalip Singh’s guardian for nine key years, effectively his mother, father and guardian all rolled into one, both in India and later in the United Kingdom.

When Dalip Singh came to London in 1851, shortly after converting to Christianity, it was Login and his wife who took care of him and introduced him to the British society.

One well documented anecdote has Login showing Dalip Singh the re-cut Kohinoor and allowing him to handle it shortly before the deposed ruler handed it over formally to Victoria.

Although Login retired from his job as guardian in 1858, after Dalip Singh came of age, he was awarded a generous annual pension of £300. Measured by the average earnings index this would today amount to more than £180,000.

Not content with the pension he had been awarded, Login wrote to the East India Company on March 1858: “Having been aware that it has not been in my power to save much from my allowances or make sufficient provision for my family during the nine years in which I acted as his guardian, he (Dalip Singh) has in a very generous and considerate manner spontaneously proposed to settle an annuity upon me during his life of £1,000.”

Earlier, in support of his application for the £1,000 from Dalip Singh’s privy purse, Login wrote in a letter seen by The Tribune, “It has been a source of much gratification and thankfulness to me that I have been able with God’s blessing to establish and confirm a feeling of goodwill, loyalty and respect towards the British government on the part of one from whom such sentiments could scarcely be expected.”

Notwithstanding all his efforts, Login was destined to be disappointed. East India Company Secretary Norman Melvill wrote back to him saying, “The receipt of any present or gratuity from a native of India, by any officer of the Company, is prohibited..the arrangement cannot receive either the approval or the sanction of the Court of Directors.”

Login died in 1863 and Dalip Singh paid for the headstone above his grave.