Case closed, but not wounds of Sikh community

Comments Off on Case closed, but not wounds of Sikh community 331 Views

After a 15 year long probe, the National Human Rights Commission has ordered compensation for families of people who were illegally killed, cremated during militancy in Punjab. The moot point is: will the belated step bring closure to one of the darkest chapters in the state’s history?

Amritsar, Punjab: They lost their family members in illegal killings and disappearances during militancy in Punjab. In an effort to assuage their pain, the National Human Rights Commission ( NHRC) has ordered compensation ranging from Rs 1.75 lakh to Rs 2.5 lakh each to families of 1,513 identified people who were killed and cremated in Amritsar and Tarn Taran districts. Too little, too late?

The commission might have closed the Punjab mass cremation case after a 15 year long investigation, but the cry for justice and truth has not died down.

The Supreme Court had referred the case to the NHRC in December 1996 after the ‘disappearance’ of human rights activist Jaswant Singh Khalra, who had brought to light that a number of youths killed in ‘encounters’ were cremated by the police from 1984 to 1994 but listed as ‘unidentified’ in records.

In 2006, the NHRC appointed justice KS Bhalla, a retired judge of the Punjab and Haryana high court, for conducting an inquiry to establish the identity of as many bodies as possible of the 814 unidentified ones. In his report, justice Bhalla stated that the committee had been able to identify 143 bodies.

For facilitating identification of the remaining bodies, the commission constituted another committee, led by IAS officer DS Bains. On March 22 this year, the Bains committee submitted its final report, which stated that it had identified 125 bodies.

We met several victims’ families, some of whom have already received compensation or are in line to get it. Not all of them, however, are deserving cases. Among the others are those whose relief claims were not accepted even though their near and dear ones disappeared in the early 1990s and are still untraced.

Jasbir Singh of Kot Mit Singh locality in the city was picked up ‘mistakenly’ by the police in 1991. He is still untraced. According to his brother Harbhajan Singh, Jasbir’s namesake who was on the cops’ wanted list used to stay in the locality.

“I presented my case for compensation before the Bhalla committee, but it was rejected. I just want to know the truth,” said Harbhajan.

In a similar case, cops mistook Pargat Singh of Kot Khalsa locality for Pargat Singh of Khalra town in Tarn Taran district. His whereabouts are still not known. His father, too, has not received any compensation despite having presented his case. 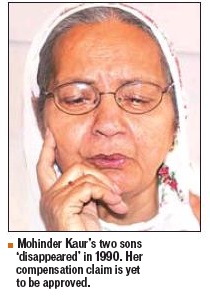 Among the many untraced people are Bhupinder Singh Pappi and Jatinder Singh Sukhi, residents of Gali Ghariala in the walled city of Amritsar. Their mother, Mohinder Kaur, has appeared before all committees with whatever evidence she could lay hands on. But her case was never considered for compensation. Sukhi ‘disappeared’ i n August 1990, while Pappi went missing two months later, according to Mohinder Kaur.

“I do not want money. I want to know my sons’ fate and seek punishment for those responsible for their ‘disappearance’,” she said.

Bhupinder Singh Binda of Bazaar Bansanwala in the city, too, was listed as ‘untraced’ in police files.

“The compensation is not enough to wipe our tears and give us consolation. The cops responsible for our father’s ‘disappearance’ should be punished as the very acceptance of our case for compensation is an act of admission that wrong was done to us,” said Navdeep Singh, Binda’s son.

2012-04-07
SSNews
Previous: Media under the influence of lobbyists, money and power
Next: Story of four siblings