Canada:It was supposed to be a historic moment, the culmination of two years of work and the start of an exciting program for about 60 Surrey kids.

But Canada’s first Sikh cadet corps has already run into some opposition – over its name. 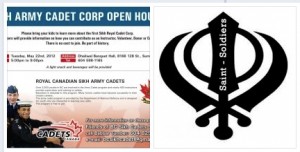 “We were told there was a problem with the naming,” said Pargat Singh Bhurji, director of the Friends of the Sikh Cadet Corps Society. “There was a hesitation over the word Sikh.”

The opposition to the name – the 3300 British Columbian Royal Army Cadet (Surrey Sikhs) – was raised in a Sept. 13 meeting between the Sikh cadet corps organizers and representatives from the Canadian cadet program.

According to Kimberley Caron, a Department of National Defence spokeswoman for cadet organizations, officials believe the use of the word “Sikh” gives the wrong idea.

“The issue is it’s got to be all-inclusive,” she said, adding the name insinuates non-Sikh youth can’t join.

“You want to make sure that the program is all-inclusive for all Canadian youth between the ages of 12 and 18,” she said. “We want Sikh youth to join; we want non-Sikh youth to join . . . everybody.”

But according to organizers in Surrey, they’d been in discussions with the military for about a year and no one had objected to the new unit’s name and they had received the green light each step of the way.

The society has used the name Friends of the Sikh Cadet Corps Society to open a bank account, send out official letters and recruit members. Uniforms and shoes and special turbans have already been ordered.

An official launch was scheduled for Sept. 19 at the Sikh Academy in Surrey. “Then in a matter of weeks’ time, there is a problem . . . I think it’s ridiculous,” said Bhurji. “It was like the carpet was pulled out underneath our feet.”

But Caron said: “It’s only coming to light now because they [the unit] were ready to start parading.”

The Canadian Forces is responsible for making sure a cadet corps has the necessary components, like the right leadership, sponsorship, community support and name.

“In this case the Canadian Forces is not satisfied that all the components are there,” she said. “The word Sikh has not been approved . . . and we have other concerns in making sure the right leadership and support for the corps [is there].

“You would want to make sure the name was actually approved prior to paying and setting all of that up.”

Bhurji notes the program has been open and pluralistic. Some regiments have names with cultural connotations such as the Canadian Scottish Regiment or Irish Regiment.

On Sept. 16, organizers were told that the Department of National Defence will be involved in the decision of the name. But two weeks later, the issue still hasn’t been resolved, leaving some families feeling misled and frustrated.

Avtar Gill said his 11-year-old son Mehtab had been counting down the day until the launch.

“He was very excited. He’s asking me every day, ‘When are we starting?'” said the Surrey dad.

Gill had enrolled Mehtab in a Delta cadet corps two years ago, but with no other Sikhs or East Indians or Asians in the group, Mehtab never felt like he fit in. After two sessions he decided to quit.

Gill is baffled by the holdup. “I don’t understand why this is an issue,” he said. “The word Sikh means learner. I don’t see why anyone would have an issue with that name.”

Sikhs come from a long military lineage. In the First World War, more than 65,000 Sikhs fought for the British, and another 300,000 Sikhs served in the Second World War.

Caron said they’ve offered the group a number of alternative names that they believe still celebrate Sikh heritage, like naming it after a prominent Sikh leader, veteran or community member.

But without Sikh in the name, the cadet corps wouldn’t have drawn as much interest, said Bhurji, a pediatrician at B.C. Children’s Hospital. He stressed that while the kids who signed up may be Sikhs, they are also Canadians.

“These are kids brought up here who have Canadian values and want to serve their country,” he said, estimating 10 to 15 per cent of the members will serve in Canada’s armed services as adults.

Caron said “it’s sad to see it’s sort of taken this turn,” because the group is “great for community pride with Sikh traditions with multicultural-ism and pluralism in Canada.”

Tagged with: Canada's Military says no to 'Sikh' cadets

Previous: ‘Roll of Honour’ is a Sikh boy’s poignant tale of the militancy years
Next: When hundreds of Sikhs lost their homes in Orakzai