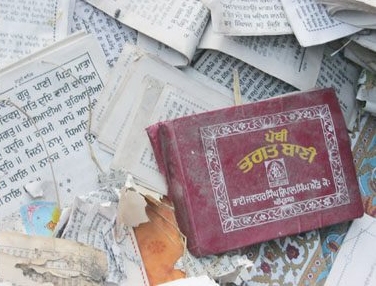 AMRITSAR SAHIB, PUNJAB (KP) – Panthic organizations were stunned to see another appalling example of the ongoing desecration of Gurbani across Punjab in which scores of sacred Angs of Sri Guru Granth Sahib Ji’s saroops and pothees containing Gurbani hymns discarded at a rubbish collection dump near a paper recycling mill in the outskirts of the town of Daalam, Amritsar.

Varous Panthic organizations, including the Sri Guru Granth Sahib Satkar Committee, and the Jathedar of Sri Akal Takht Sahib visited the site where bundles of discarded Gurbani Pothees and Angs were dumped by the Jawahar Singh Kirpal Singh publishing company, which prides itself as the “oldest publishers of Sikh religious books”.

Representatives from the Sri Guru Granth Sahib Satkar Committee stated that they have been complaining about the ongoing desecration of Gurbani by these private publishers, yet the Sri Akal Takht Sahib and the Shiromani Gurdwara Parbandhak Committee have not taken any concrete steps to stop the beadbi.

The sangat that had gathered at the site immediately began to collect the discarded Angs and Pothees, and were being transported to a proper location where the damaged Angs and Pothees would be given utmost respect before there are cremated according to Sikh maryada.

This is not first time publishers and printers of Gurbani have been found guilty of committing such sacrilege, another Amritsar based publisher Chattar Singh Jeewan Singh, and the GurUpdesh Printing of Delhi Sikh Management Committee have also committed similar offences in the past.  Sri Akal Takht Sahib and the Shiromani Gurdwara Parbandhak Committee have never taken any serious action against the offenders.