BATALA:Punjab, Every year, Batala plays host to a wedding in which thousands of baraatis come from as far away as Sultanpur Lodhi. It is the anniversary celebration of Guru Nanak’s marriage to Mata Sulakhni. 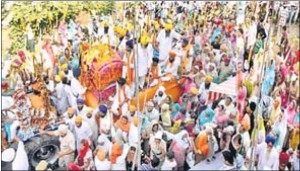 laced in a palanquin leads the procession of baraatis through the main bazaars of the town.

Devotees c o nv e r ge d on Gurdwara Kandh Sahib here on Saturday to celebrate Babe da viah, the 525th anniversary of the guru. The entire town wore a festive look with buntings and decorations put up on the roads leading to the gurdwara.

A massive cleanliness drive has been launched in the town, which has been decorated tastefully with lights and flowers and 101 akand paths of Guru Granth Sahib have been started across the town.

The shobha yatra, led by the Panj Piaras, began from Gurdwara Dera Sahib, passed through the town carrying the palki of the Guru Granth Sahib followed by several raagi jathas singing hymns in praise of the guru.

The display of gatka and beating of nagaras by Nihangs also formed part of the marriage procession.

Baraatis were received on Friday night amid bursting of crackers at Gurdwara Dera Sahib, the place where the guru’s baraat was received in 1487.

A langar followed the welcome. Later, the baraatis spent time at Gurdwara Kandh Sahib that has come up at the site where the guru’s baraat stayed in the 15th century.

Guru Nanak was married to Bibi Sulakhni, daughter of Mul Chand Khatri, revenue official at Batala. It is said that during the wedding Guru Nanak was made to sit along a mud wall. Teasing the groom, his sister-in-law told him not to sit near the wall as it could collapse any time. Then the Guru said the wall would not collapse till life existed on earth. The mud wall continues to stand till date and has been encased in glass.

Previous: Give my mother at least the dignity of being a statistic
Next: Pakistan allows Indian Sikhs to visit four more gurdwaras