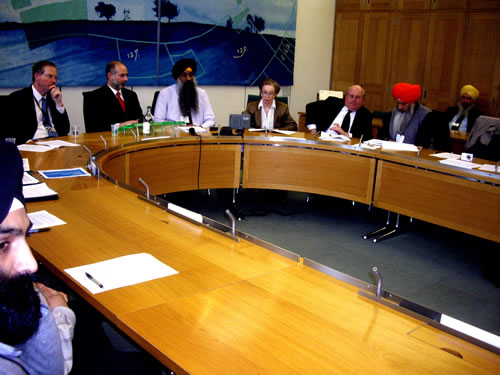 London, UK: Around one hundred and fifty Sikh representatives from across the UK took part in a lobby at the UK Parliament organised by the Sikh Federation (UK).

Several human rights issues were raised at the lobby, including the case of Professor Davinderpal Singh Bhullar, the continued imprisonment of Daljit Singh Bittu since August 2009 and the lack of justice for the November 1984 anti-Sikh pogroms. Paramjit Singh Gazzi, the President of the Sikh Student Federation, was present at the lobby to give a first-hand account on many of these issues.

Fabian Hamilton MP, the Chair of the All Party Parliamentary Group for UK Sikhs, chaired the meeting alongside Dabinderjit Singh of the Sikh Federation who contributed on each of the issues. Fabian Hamilton confirmed he would facilitate meetings in the next few weeks with the National Union of Students and Amnesty International to assist with human rights campaigns involving Professor Bhullar and Daljit Singh Bittu.

Respect for the Sikh Identity was the second main issue and an update was provided on the trial at UK airports of checking the Sikh turban and a strategy for influencing the European Commission to implement similar procedures at airports across Europe. Sukhvinder Singh, an advisor to the Sikh Federation explained developments at the UK and European level.

Bavinder Kaur, the Chair of the Sikh Womens’ Alliance, was asked to speak about the need for a stronger political voice for UK Sikhs, the importance of the Sikh Council UK and the need for the Coalition government to move away from dealing with one or two so-called ‘community leaders’. Many of the dozen or so MPs from all three of the main political parties that spoke at the lobby agreed that officials needed to change the way they interact with the Sikh community. 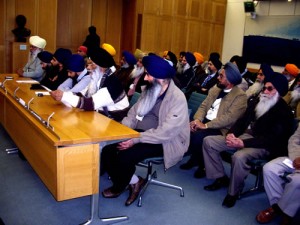 MPs that attended included a number of former Ministers – John Spellar MP, Pat McFadden MP and the former Foreign Secretary Rt. Hon. Margaret Beckett MP. The most significant contribution came from the Deputy Leader of the Liberal Democrats, Simon Hughes MP, who spoke passionately at the June Freedom Rally in Trafalgar Square, recently visited Amritsar as promised and confirmed that a date for a Sikh delegation to meet the Deputy Prime Minister would be confirmed in early January 2012. He also committed to facilitate a schedule of meetings between the Sikh Federation and Ministers in a number of different Government Departments, including the Home Office and Foreign and Commonwealth Office.

The Chair of the SIkh Federation (UK), Bhai Amrik Singh, spoke at the end to specifically thank Fabian Hamilton, Simon Hughes and other politicians that participated in the lobby.

At the end it was agreed the next lobby towards the end of March 2012 will be combined with a celebration of Vaisakhi and a pledge was made to have senior Ministers and Shadow Ministers from the three main political parties present to answer questions on the sorts of issues raised at this lobby.

2011-12-19
SSNews
Previous: 1984 Victims to Akal Takhat: “Bachchan Instigated killings of Sikhs”
Next: The Sikh seat of power that is now an ‘official’ garbage dump