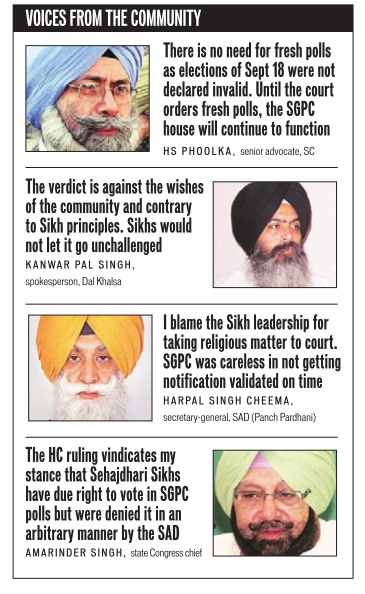 Amritsar, Punjab: The Shiromani Gurdwara Parbandhak Committee (SGPC) is studying the implications of Tuesday’s order pronounced by the Punjab and Haryana high court granting voting rights to Sehajdhari Sikhs, and may move the Supreme Court if required.

“The issue would be discussed with the SGPC president and the order would be examined and if need arises we would approach the Supreme Court filing a special leave petition (SLP) challenging the order of the high court,“ said advocate Gurminder Singh representing the SGPC.

“I think the need for filing a SLP may arise because the (central) notification was issued primarily on the prayer of the SGPC as it was felt that by giving voting rights to Sehajdhari Sikhs, non-Sikhs would take part in the election process of the SGPC,“ said Gurminder The president of Sehajdhari Sikh Party (earlier Sehajdhari Sikhs Federation) Paramjit Singh Ranu said his party would approach the Gurudwara Election Commission requesting it to start the procedure for re-conduct of the SGPC polls by including Sehajdharis in the voting list. “We would request the commission to request the union home ministry for ordering a re-poll.“

He said the party’s further course of action would depend on the decision of the Gurdwara Election Commission. “If it doesn’t agree for a re-poll, we may have to approach court again.“

Gurminder, however, said the high court was silent on the reconduct of elections. “It (the HC order) simply talked about the notification of October 2003 and said it was not proper as any amendment in the gurdwara act has to be effected by Parliament.“

SGPC president Avtar Singh Makkar said there was no scope for a re-poll. “We were contesting the case to justify the central government’s decision for denying voting rights to Sehajdharis,“ Makkar said.

“Today’s order of the high court has only questioned the procedure followed to bring in the amendment. I think things could be set right by adopting the correct procedure.“