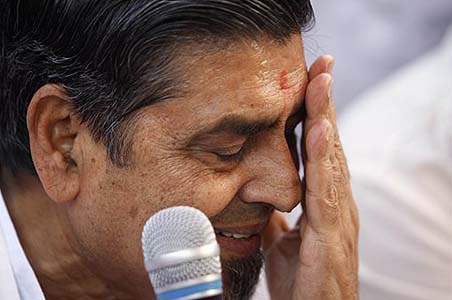 New Delhi, India: Protesting over the name of Jagdish Tytler among the awardees for Maulana Mohammad Ali Jauhar Award, journalist Zafar Agha and Social worker Shabnam Hashmi, on 7th of December 2011 refused to accept the award and even attend the award function. The award was to be presented on December 10, 2011 in a function to be organized at India Islamic Cultural Centre here in New Delhi.

Later on December 10, 2011 many sections of media reported that congress leader Jagdish Tytler had withdrawn himself from Maulana Mohammad Ali Jauhar Award ceremony which was to be held at the India Islamic Cultural Center. “Tytler took this decision after an appeal was made to the seven individuals shortlisted for the Maulana Mohammad Ali Jauhar Award, to not share platform with the former union minister over his alleged complicity in the 1984 Anti-Sikh progrom” a media report added.

Earlier, on December 7, while giving reason of refusing to accept the award Shabnam Hashmi said that we will not share the dais with those who are responsible for killings of Sikhs in 1984 violence. “There are many reports which clearly show that Tytler played important role in Sikh genocide. Union of Journalist that had covered the genocidal violence had also said that during the pogrom Tytler played important role against the Sikh.

Zafar Agha who had reported the incidents of violence said that like Gujarat massacre, 1984 pogrom was also an organised and state sponsored. We had never seen the carnage like that before. I know that Tytler played notable role in that, then how can I share an award with him. If I will be nominated for Nobel Prize with Narendra Modi I will not accept that too. In the same way, I will not accept this award with Jagdish Tytler. Modi is responsible for the genocide of Muslims and Tytler is of Sikh.

This is a sign of symbolic resistance to denial of justice for the victims of Sikh Genocide 1984.