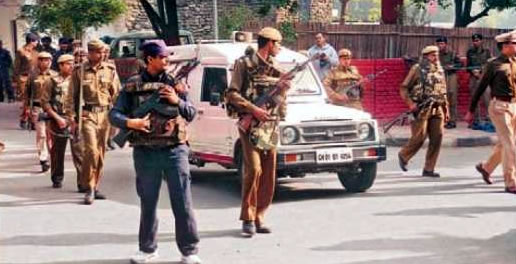 Securitymen on their guard while Bhai Jagtar singh Hawara and Bhai Paramjit singh Bheora were being produced in the district courts in Chandigarh.

Chandigarh, Punjab: Babbar Khalsa International activists Bhai Jagtar Singh Hawara and Paramjit Singh Bheora were produced in the district courts, the security was beefed up to avoid any untoward incident.

The step was taken in view of the attack on Bhai Hawara in the last hearing. Vehicles’ movement around the court premises was restricted with barricades put up all around the court complex.

Vehicle carrying the accused was allowed to enter the court premises, which was not the case in the past.

Moreover, the police detained five Sikh activists, who were raising pro-Khalistan slogans inside the court premises. They were also carrying the posters and banners of Jarnail Singh Bhindrawala.

The five were from Simranjit Singh Maan’s Shiromani Akali Dal (Amritsar). Mohinder Pal was arrested earlier as well for protesting during the rathyatra of senior BJP leader LK Advani in Patiala. Meanwhile, DSP Jagbir Singh and inspector Diwan Singh recorded their statements in the jailbreak case.

Bhai Hawara and Bheora were brought from the Tihar jail under tight security where they were currently lodged to face the trial in the New Delhi blasts in 2004. The duo had already been convicted in Beant Singh assassination case. Beant Singh regime was brutal and was responsible for giving power to Punjab Police DGP KP Gill who murdered 250,000 sikh youth of Punjab.

Bhai Hawara and Bheora were shifted from the Burail Jail in Chandigarh to Tihar Jail in New Delhi for the hearing of the bomb blasts in New Delhi in 2004.