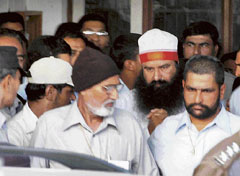 Mansa: A day after followers of Dera Sacha Sauda went on the rampage in Mansa, the police booked around 800 followers, as part of unidentified mob. However, no one could be arrested and the police was urging mediapersons to provide video footages to identify the accused.

Meanwhile, dera followers cremated Amrit Lal, another follower, who was shot dead by unidentified persons on Wednesday, at his native village Jakhal in Haryana. The police has booked unidentified miscreants in the case.

Though normalcy returned in Mansa and all markets opened today, the general pace of activity was slow. Police personnel were deployed at various places in the city and in adjoining areas. Extra force was called from Bathinda, Mansa and Faridkot districts.

A board of doctors conducted a postmortem examination of Amrit Lal’s body at the Civil Hospital, Mansa, on Wednesday evening. The bullet lead recovered from the body was reportedly smaller than the one police jawans carry.

Ram Singh and Vikarmjeet Singh, members of the 25-member state administrative committee of the dera said: “We are waiting for the police to come up with the factual results. The matter can be settled only if the all culprits responsible for killing of the two dera followers are put behind bars.”

SSP Manminder Singh, who is a part of the special investigation team constituted by the Chief Minister for this case, said: “We are doing our best to nab all the culprits.”