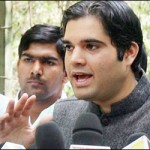 Amritsar, Punjab: Pilibhit MP Varun Gandhi, who paid obeisance at Harmandar Sahib here on Sunday, was denied a `siropa’ (robe of honour) by the Shiromani Gurdwara Parbandhak Committee (SGPC). He was only given a set of books on Sikh history.

Punjab Sikhs had protested against the BJP leader following his allegedly communal speech during campaigning for the Lok Sabha elections earlier this year. Despite attempts by mediapersons to seek his comments, Gandhi simply said: “No political questions”. When asked about the purpose of his visit to the city, he said, “This is a personal visit. My maternal family has a strong association with Punjab, so I have come here to seek the blessings of people of the state.

There is a special place in my heart for Punjab and its people.”

Gandhi was accompanied by local BJP leaders and state Transport Minister Master Mohan Lal. Remembering his childhood, Gandhi said he had visited Harmandar Sahib along with his mother, Maneka Gandhi, to participate in `kar seva’.

Later, he paid homage at Jallianwala Bagh and also visited Durgiana Temple. After a brief meeting with local BJP leaders at the Circuit House, Gandhi left for Jalandhar to attend the inaugural Dental Youth Festival.