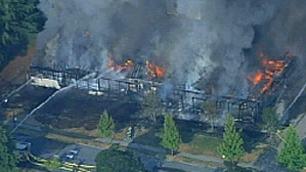 Vancouver, Canada: A Sikh school was set on fire on Thursday but shockingly the Canadian police has confirmed that the fire was deliberately set, and are appealing to the public for assistance in locating a possible witness.

The fire spread quickly and destroyed the Khalsa School near the intersection of Fraser Street and 45th Avenue in East Vancouver. There were no injuries.

A staff member entered the school Thursday morning and called 911 when she smelled smoke. As she made the call, a second woman ran up to the school, pulled the fire alarm and yelled at the staff member to get out, Vancouver police Const. Jana McGuinness said in news release Friday.

“Arson investigators are appealing for the woman who pulled the fire alarm to contact them as she may have important information relating to the investigation,” the release said.

Firefighters arrived minutes after the alarm was sounded to find the blaze already raging through the main building and several portable classrooms, sending a massive plume of smoke over the neighbourhood.

The fire was largely under control within an hour, but only one of about half a dozen portables survived the blaze.

Deputy Fire Chief Tim Armstrong said Thursday the cause of the fire appeared suspicious because it rapidly engulfed one building and two portables at virtually the same time.

Former B.C. premier Ujjal Dosanjh — now MP for Vancouver South — came over from his constituency office a few blocks from the school.

“This is a huge setback for people who send their children to the school,” Dosanjh said. “I understand arson is suspected and if that’s the case, I hope the police catch the culprits.”

The Khalsa School is run by the non-profit Satnam Education Society. Ripudaman Singh Malik, who was instrumental in establishing the school in 1986, is chairman of the society’s board.

Five years ago, several portables at the school were damaged by a fire that was determined not to be a case of arson. Anyone with information is asked to contact the Vancouver Police arson squad at 604-717-2541 or Crime Stoppers at 1-800-222-8477.

The school’s little gurdwara was also destroyed, and many feared the Sikh holy book, the Guru Granth Sahib, had been destroyed, but after the flames were extinguished, firefighters entered the charred buildings, recovered the scriptures, brought it out covered in a white cloth and turned it over to a school official. The Granth Sahib was undamaged, and members of the gurdwara attributed it to the will of the Akal Purakh.

A Sikh granthi dressed in white robes and a white turban spread a large white sheet on which which the scripture was placed, and then wrapped in the sheet and carried by the priest on his head while the sangat followed behind.

Tagged with: khalsa school fire bc

Sikh community thanks firefighters for their efforts