The new face of Canada's Sikhs 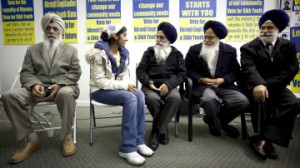 Surrey, Canada: Nineteen-year-old Gursimran Kaur puts gender equality and fighting domestic violence at the top of her agenda as a new member of the management committee at one of the largest Sikh temples in North America. But she is no liberal in religious matters. She and two other women in a youth slate of 18 won a decisive victory in their election to the management of the Guru Nanak Sikh Gurdwara temple in Surrey, B.C., promising to reintroduce traditional customs.

The slate defeated community leaders who have run the institution since the mid-1990s.

Born in the neighbourhood of The Golden Temple in India, Sikh’s holiest shrine, Gursimran Kaur said Monday her stand on behalf of women’s rights is grounded in the centuries-old traditions. “In our religion, the first guru told us equality for women is very important because she is the one who creates the whole world, she is the creator,” she said.

“ This is a movement to address the needs of Canadian-born youth. ”— Sukhminder Singh Virk

Throughout the campaign, Gursimran Kaur, a Simon Fraser University student majoring in mathematics, received phone calls from women saying the temple needed advocates for women’s rights. She quickly realized this would be her role.

Other women “would raise their voice through me,” she said.

The victory of religious Sikh youth with progressive ideas reflects a significant shift in the community, holding out the promise of recasting the image of the turbaned Sikh in B.C. The official returns, signed by independent chief returning officer Ron Laufer, show that the 18 youth slate members each received support of around two-thirds of the 21,188 ballots cast in the election.

The newly elected management committee members are mostly too young to have played any role in confrontations within the Sikh community in recent years. Most were born and grew up in religious families in Canada, although Gursimran Kaur, who lives with her parents, came to Canada when she was four.

“This is a movement to address the needs of Canadian-born youth,” Sukhminder Singh Virk, another member of the youth slate, said in an interview. The temple needs “a better connect with this demographic,” said Mr. Virk, a 26-year old who just received his bachelor of law.

Temple politics in B.C. have been dominated by sharp religious differences for more than a decade. The disputes erupted in violence in 1997 over whether they could use table and chairs in the temple dining hall.

The community has also been under a shadow since the Air India disaster in 1985, the deadliest act of terrorism in Canadian history. Bombs planted on airplanes in Vancouver in protest over political issues in India killed 331 people.

The youth slate, who are mostly in their 30s, ran on a two-pronged platform. They advocate a return to traditional religious observance, and an expansion of temple programs mostly to respond to the needs of young families and youth. They promise better maintenance of the buildings and tighter management of finances.

They plan to develop programs to combat drug use and gang violence, and hold workshops on Sikh scripture and rituals in English to appeal to the younger generation. Their platform also includes new community services programs at the temple. Long range plans call for a safe-house for women.

The youth slate’s campaign looked like a page torn from mainstream politics, with a Facebook site and Twitter messaging. They organized phone banks to contact voters in the days leading up to the election; they had 10 buses bringing temple members to the poll to vote. Despite pouring rain, some members waited more than 90 minutes to cast their ballots. The lineup stretched close to a kilometre at one point.

The incumbent slate of moderates were, on average, about 20 years older. Paul Gill, an active supporter of the moderate slate’s candidate for president, Harjinder Singh Cheema, said their slate also brought voters to the poll. However their supporters “changed their mind” in the ballot booth and voted for the youth slate, he said.

“Many people have [joined] the temple in the past five to seven years,” he added. “They do not realize what has happened in the past.”

The moderate slate was undermined by this open approach to the membership. “Those that support the moderate philosophy are not that committed. They are like floating on the edge and do not have strong allegiance to either side,” he said.

For Gursimran Kaur, the introduction of workshops on violence against women and on women’s rights is now her top priority.

“Domestic violence is one of the biggest issues in our community,” she said. “No matter if they are older or younger or kids, they will … learn how to live their life and what rights they have. We’re going for women’s rights first.”