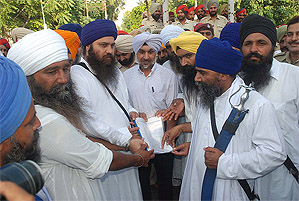 Bathinda, Punjab: Tension brewed in Talwandi Sabo today when the district police restrained hundreds of Sikhs outside Takht Damdama Sahib from moving towards Bathinda to hand over a memorandum to the Deputy Commissioner.

In the memorandum, they were seeking the release of SAD (Panch Pardhani) chief Daljit Singh Bittu who was arrested by the Ludhiana police after the arrest of Balbir Singh Bhootna, an alleged terrorist.

Taking preventive measures, all roads leading to Talwandi Sabo were cordoned off with a heavy deployment of police force.

Officials tried hard to make the Sikhs agree to hand over the memorandum to the ADC at Talwandi Sabo, but found them firm in their determination to proceed towards Bathinda.

Irked over the “rigid” attitude of civil and police officials, the Sikh leaders cautioned the administration that they would be held responsible for any untoward incident that took place there.

Sensing the gravity, the officials contacted their seniors and after getting nod allowed the caravan to proceed ahead.

Though the leaders of the Sikhs had assured of maintaining law and order during the march on the way, they were encircled with police vehicles till they reached Bathinda. They assembled outside Government Rajindera College in Bathinda, where the first Dera-Sikh clash took place in May 2007.

Submitting the memorandum to ADC Upjeet Singh Brar, representative of the Bathinda DC, they urged him to bring their matter to the notice of the Chief Minister.

Earlier, before leaving the gurdwara, they gathered at a stage where the Dera Sacha Sauda chief came in for a harsh criticism.

They alleged that the Badals were shielding the Dera chief and his followers, but committing atrocities on the Sikhs who opposed the alleged high-handedness of the chief of the sect.

Meanwhile, following their weekly practice, a group of Marjeevade (those ready to sacrifice their lives) was also dispatched towards the state headquarters of the sect at Salabatpura, but was intercepted on its way.