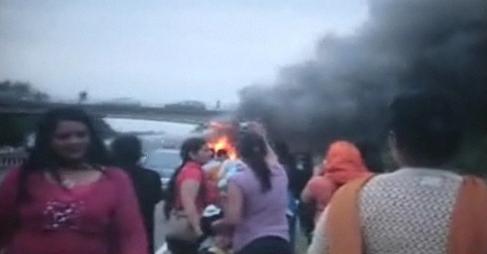 UK: A group of Sikh women and children who escaped a burning bus on a British highway last week were subjected to racist abuse by passing motorists, the BBC reported.

Sixty-six women and children who worship at a gurdwara in the town of Luton were returning from a day out on the beaches of Weymouth in southern England on Friday when their coach caught fire on a highway.

Helped by an off-duty policeman, all the passengers were evacuated to safety minutes before the double-decker coach exploded in a fireball, melting the tarmac, eyewitnesses said.

“It all happened in seconds. As we were backing away from the coach there was an explosion, and then another one. It was horrific. The whole thing went up in seconds,” said one of the women in the coach, Inderjeet Buar.

She said it was amazing that no one was injured in the incident, which took place in the evening.

“We had organised a summer camp at our temple in Luton which was attended by many children. As part of the camp we organised a day out to Weymouth and over 200 people came, travelling on three coaches,” the Dorset Echo quoted Buar as saying.

Another woman travelling in the coach said the evacuees were subjected to racist abuse by passing motorists as they stood on the hard shoulder of the highway, wrapped in foil blankets and waiting for another coach to collect them.

Inderjeet Kaur told BBC Television News that some motorists stopped to look and hurl racist abuse. “They were pointing saying ‘go back to the burning bus’, and sticking their fingers out,” she said.

It took 25 firefighters 90 minutes to put out the blaze, and a spokesman for coach operators said an investigation would be carried out into the cause of fire.

Spokesman Christopher Nice said, “The quick thinking and professionalism shown by our driver enabled all of the 66 passengers onboard to be promptly evacuated from the vehicle and led to a safe location.”