Sikhs were the reason for Pakistan’s defeat in 1971 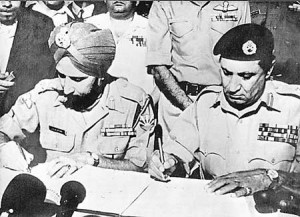 Chandigarh, Punjab: The other day I read an article on the book Crisis of Leadership, authored by Maj Gen Mukesh Khan of the Pakistan Army. The author speaks about his experiences during the 1971 war and makes a special mention of the bravery of Sikhs in the Indian Army.

He writes that Sikhs formed a formidable force and were the reason behind their defeat. On December 3, 1971, the infantry brigade of the Pakistani forces attacked the Indian Army near Hussainiwala border.

With their brigade comprising the powerful Punjab regiment and Baloch regiment, the Indian Army was forced to retreat. As the Pakistani Army reached near the Kausre-Hind post (Kasure), they were halted by a small segment of the Indian Army belonging to the Sikh Regiment.

With slogans of Bole so Nihal reverberating in the air, the Sikh soldiers went on the roof and persistently opposed them. The entire night they showered fire on Pakistani soldiers and it was on the following day when Pakistani tanks bombed the post that some Sikhs were martyred. The remaining brave soldiers then destroyed the Pakistani tanks. Fighting with great bravery, they marched forward and thus our Army lost its foothold, the author wrote in the book.

“Alas! A handful of Sikhs converted our great victory into a big defeat and shattered our confidence and courage. The same thing happened in Dhaka, Bangladesh. In the battle of Jassur, the Singhs opposed the Pakistani Army so fiercely that our backbone and foothold were lost. This became the main reason for our defeat and Sikhs’ strength and safety and honour of the country became the sole cause of their victory,” the author records in his book.