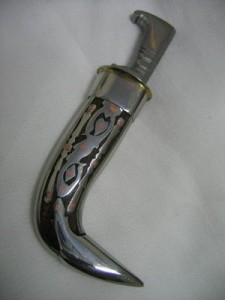 The Kirpan An emblem of courage and self-defense Symbolizes dignity and self-reliance – the capacity and readiness to always defend the weak and the oppressed Helps sustain one’s martial spirit and the determination to sacrifice oneself in order to defend truth, oppression and moral values Initiated Sikhs wear a strapped kirpan as mandated by Sikh Rehat Maryada

Etymology ‘KIRPA’ + ‘AAN’. ‘Kirpa’ means an act of kindness, a favor; and ‘aan’ means honor, respect, self-respect. To call it a dagger or knife is rather insulting to this article of faith, which functions quite differently from the other two.

Historical Overview Made a mandatory article of faith for all initiated Sikhs on March 29, 1699 by Guru Gobind Singh, the tenth and the last Sikh prophet. The Sikh Gurus uplifted the downtrodden and impoverished masses which represented the low castes and were brutally victimized by higher castes. Sikhs carried kirpans as an assertion of their identity in defiance to the state ordinance imposed by authorities who once ruled South Asia and opposed the Sikh articles of faith. Since they were sentenced to death if caught, only those who had strong convictions dared to become Sikhs. Kirpan legalized by the British and exempted from Arms Act in July 1911 Judge Painter in Ohio, concurring in a judicial opinion in 1996 wrote, “To be a Sikh is to wear a kirpan–it is that simple.” (http://www.sikhcoalition.org/LegalUS6.asp)

Significance Represents transcendental knowledge that cuts through ignorance, as described in the Sikh scripture, Guru Granth Sahib: “From the Guru, I have obtained the supremely powerful sword of spiritual wisdom. I have cut down the fortress of duality and doubt, attachment, greed and egotism. The Name of the Lord abides within my mind; I contemplate the Word of the Guru’s hymns.” (Guru Ram Das, Maru, pg. 1087) Acts as a constant reminder to its bearer that a Sikh must protect the weak and fight against all forms of injustice Makes up part of a Sikh’s religious uniform or body – without it, a Sikh feels handicapped

Mandatory Article of Faith Mandated by religion, all initiated Sikhs must carry the five articles of faith, which include the kirpan. “Have, on your person, all the time, the five K’s:  the Keshas (unshorn hair); the Kirpan (sheathed sword) –The length of the sword to be worn cannot be limited; the Kachhehra — drawers like garment may be made from any cloth, but its legs should not reach down to below the shins; the Kanga (comb);  the Karha (steel bracelet).” — The Sikh Rehit Maryada (Code of Conduct)

Facts on Kirpan US, Canadian and British courts have always upheld Sikhs’ right to wear the Kirpan as an article of faith Sikhs have won all known Kirpan cases that have gone to court in the United States and Canada; some cases have been dismissed by the courts that have recognized it as an article of faith According to the Sikh code of conduct, the kirpan is to be worn using a gatra (a strap that enables a kirpan to be suspended near one’s waist or tucked inside one’s belt).  The implication of this explicit requirement is that the kirpan can’t be worn as a symbol.  To neglect to wear one or more of the Five Ks represents a serious lapse in the Sikh religion.