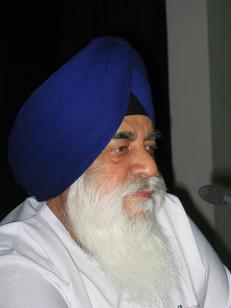 Amritsar, Punjab: Veteran Akali leader and member of the Shiromani Gurdwara Parbandhak Committee (SGPC) Manjit Singh Calcutta has created a flutter within the Akali circles and outside as well by accusing the SGPC management of “violation of hukamnamas” issued by Akal Takht from time to time.

Calcutta has sought to highlight the sensitive issue of alleged violation of Akal Takht “hukamnamas” by successive presidents of the SGPC and its management citing a couple of cases in his “open letter” addressed to the Akal Takht Jathedar. “On one hand, all of us treat ‘hukamnamas’ issued from the Takht as an ‘order of the Almighty’ and on the other hand, the SGPC itself was violating these edicts which leaves the Sikh sangat perplexed,” alleged Calcutta. SGPC chief Avtar Singh was, however, not available for comments despite repeated efforts.

Calcutta further said that in March 2000, armed with the consent of “Five Sikhs,” Akal Takht Jathedar Giani Joginder Singh Vedanti had ordered the SGPC to make an effort to frame rules regarding service, appointment and superannuation of Akal Takht Jathedars. For this, then SGPC chief late Gurcharan Singh Tohra had formed a committee under the leadership of Bhai Jasbir Singh Khannewale to accomplish the task. Ironically, the SGPC revoked the committee within days of the death of Tohra.

Similarly, in 2008, Dal Khalsa initiated the project and formed a committee which had a brief to accomplish its job by April 2010. “Here, too, the effort was criticised by SGPC chief Avtar Singh, whereas the task and effort needed a pat,” said Calcutta.“Take the case of the Dera Sacha Sauda case. The dera head had left bruises on hearts of millions of Sikhs by wearing the attire of Guru Gobind Singh. At this, the Takht Jathedar issued a ‘hukamnama’ on may 17, 2007, directing the Sikhs to get the deras closed and to effect social boycott of dera followers. But the government, which dubs itself as an Akali government, preferred to put protesting Sikhs in jails and the SGPC chief remained a mute spectator. In 2009, after getting dera supporters’ votes in the 2009 byelections, this Akali government ordered its DGP to provide security cover to deras. This in itself is a clear violation of the Takht ‘hukamnama’”. In 2007, Vedanti had pointed out that the Shiromani Akali Dal should remove the middle “Akali” word from the party name as it had declared itself to be a secular party. “This ‘hukamnama’ too went unheeded,” said Calcutta.

Similarly, early this year, some Austrian Sikh followers had opposed the “gaddi pooja” of a “deradaar” in the presence of Guru Granth Sahib and they were subjected to atrocities. The Punjab government extended full government honours to the slain dera head and the SGPC went to the extent of holding a “path” for the peace of the soul of the deceased. But no effort was made to dig out the truth behind the entire episode. No committee was formed.

Previous: Governing body formed for University at Nankana Sahib
Next: Life term for 3 in ’84 riots case