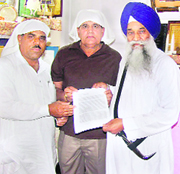 Amritsar, Punjab: An 11-member delegation of the Samaj Bachao Morcha, representing a section of the Ravidasia community, has put forth seven suggestions at a meeting with Akal Takht Jathedar Giani Gurbachan Singh to normalise strained relations among Sikhs and Dalits post murder of Sant Rama Nand in Vienna.

The Jathedar has assured them of his cooperation in resolving the contentious issue and said he would also consider their demand of setting up of a committee by the Takht to probe the murder of Sant Rama Nand and the violence erupted in Punjab in its aftermath. The delegation met Giani Gurbachan Singh at his residence.

The morcha head, Gian Chand, said on behalf of a section of Ravidasias that they would do whatever they could to restore the warmth of relations between the two communities. Expressing its concern over the alleged removal of Birs from around 100 gurdwaras named after Guru Ravidas, the morcha leaders and members of delegation assured the Jathedar that they would be leaving no stone unturned to restore the “Birs” in the gurdwaras with full respect.

The seven suggestions put forth before the Jathedar included the SGPC should be celebrating “Purabs” of all Saints and Gurus whose “Baani” has been included in Guru Granth Sahib and that there should be common cremation grounds for Sikhs and Dalits as the Sikhism has always shunned the casteist approach prevailing in society. “We feel the “Baani” of Guru Ravidas and other Saints is perfectly in line with the philosophy of Guru Granth Sahib,” said Gian Chand.