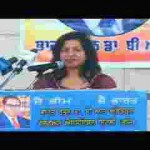 The religious groups also sought an unconditional apology from Kamlesh Ahir, for “hurting the religious sentiments of Sikhs and Hindus”.

Under the banner of General Samaj Manch, Punjab, agitators observed Phagwara Bandh in protest against a CD of Ahir, in which she reportedly detailed against caste discrimination prevailing among Punjabi immigrants in foreign countries recently.

The protesters took out a rally in the city and submitted a memorandum to local Sub Divisional Magistrate (SDM) Amarjit Pal, demanding proscription of the CD and booking Ahir, who belong to Punjab, for outraging religious feelings