HSGPC tries to take over gurdwara

Comments Off on HSGPC tries to take over gurdwara 429 Views 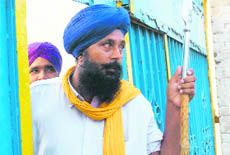 Kurukshetra, Haryana: The high drama of takeover of the famous Chhewin Patshahi Gurdwara at Kurukshetra by Haryana Sikh Gurdwara Prabandhak Committee (HSGPC) today ended in a whimper with the HSGPC (adhoc) meekly surrendering to the SGPC.

A mellowed down HSGPC president Jagdesh Singh Jhinda said taking over the control was “symbolic” to send a clear message to the Haryana government and the SGPC that “we are capable of taking control of gurdwaras in the state if our demand for a separate gurdwara prabandhak committee is not accepted by November 1”.

Tension gripped the holy town of Kurukshetra as the HSGPC translated its one-year-old threat into action and took control of the management of Gurdwara Chhathi Patshahi in a swift operation, setting the stage for a “Mahabharat” between HSGPC and SGPC.

However, an imminent clash was avoided by the intervention of IG (Ambala range) KK Sindhu, who rushed to Kurukshetra and diffused the situation after holding talks with both parties.

The decision to takeover the control of the biggest gurdwara in the state was taken at a “Sikh sangat” at Kaithal on August 28 and kept a guarded secret. The action of the HSGPC took the administration by surprise.

Claiming that the HSGPC had only abided by the wishes of Haryana Sikhs, Jhinda had cautioned that any attempt by the SGPC to regain control of the gurdwara by force would have serious consequences. “The Haryana Sikhs are united and ready to make any sacrifice,” he added.

The administration immediately swung into action and took precautionary steps to avoid any untoward incident but tension mounted following reports that SGPC (Amritsar) might retaliate.

Raghuveer Singh Virk, senior vice-president of the SGPC, had reached the spot and SGPC chief Avtar Singh Makkar was expected to reach any time. with every passing moment the situation was becoming tense and the administration was gearing to meet any eventuality.

The SGPC president, Avtar Singh Makkar, blamed the Haryana government, Chief Minister Hooda and the administration for the sudden turn of events.

He said the SGPC would not only take the matter to the “Akal Takhat” but also retaliate. The sikh leader also warned that the government would be responsible for any adverse fall out of this action.

Accusing the Haryana Chief Minister of conniving with the HSGPC, Makkar said instead of taking action against “intruders”, the police was protecting them. He asked the police to register a case of trespassing and illegally taking possession of the gurdwara.

The Punjab Vichar Sammelan of the Shiromani Akali Dal at Shimla had warned against any move to constitute separate SGPC for Haryana and described it as a conspiracy of the Congress to divide the Sikhs and categorically stated that all such attempts would be foiled.

The HSGPC had convened a “Sikh sangat” at Karnal on September 7, 2008, and given one-month ultimatum to the SGPC and the state government to constitute a separate SGPC for the states and warned that it would forcibly take control of all the major gurdwaras after the expiry of the deadline