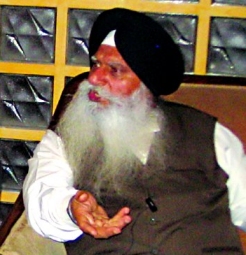 New York, NY: JUS Punjabi TV aired Mudda programme today. The hosts were Mr Riar, Gurcharanjit singh Lamba and Mr Bhamra. Ragi darshan singh was on the phone to give clarification for his blasphmeous remarks against Guru gobind singh ji.There were also 15 to 20 of his supporters inside Studio who were allowed as a courtesy.

Ragi darshan singh could not show the verses being form dasam Granth that he had quoted in his lectures at various Gurudwaras. He was repeatedly asked by Mr Riar and Mr Lamba to point the lines in dasam Granth that Guru Gobind singh had gone to a prostitute. Failing to do so his supporters felt humbled and started abusing Mr Lamba in the studio itself while the programme was on.

After the programme these people abused the hosts in foul language for exposing Ragi Darshan singh for his lies. They created a violent scene inside the studio and threatened Mr Lamba not to speak against their propaganda in future. They held the staff at ransom for sometime and left hurling dirty abuses.

This was the shameful act committed by supporters of a heretic ragi who prides himself as Ex jathedar of Akal Takhat. It is a pity that sikhs have to suffer at the hands of such thugs who want to change sikh scriptures by adopting high handed acts.

Audio file of Programme will soon be available

Previous: The battle for Brampton
Next: Sikhs complain to BBC trust for misuse of sikh insignia