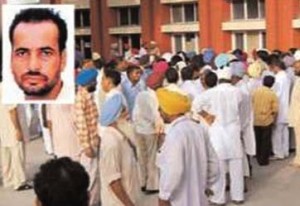 Mansa, Punjab: Tensions marred  Punjab again as a Dera Sauda activist, accused of involvement in anti-Sikh clashes, was on Tuesday shot dead by unidentified assailants near Chakerian village, 8 km from here. Lilli Kumar was attacked when he was returning to his village Alampur Mandran on a motorcycle after appearing in the court of District and Sessions Judge at Mansa in connection with a criminal case registered against him after a Dera- Sikh clash in September 2007.

Four motorcycle-borne assailants pumped several bullets into Lilli near Chakerian Chowk around 3 pm. The body was taken to Mansa Civil Hospital,where hundreds of Dera followers started gathering, including the 25-member core committee of Dera. Police were deployed in strength around the hospital. SSP Manminder Singh visited the hospital as well as the murder site.

He said a case had been registered and a Special Investigation Team, headed by SP (Detective) Sukhpal Singh, constituted to investigate the crime. Lilli Kumar, a patwari, had been booked by the Mansa police for alleged involvement in initiating a violent clash at Alampur Mandran village on September 3, 2007.

He had organised a naam charcha (religious discourse) at his house in the village despite objections. As Sikhs of the area arrived to stop the function, Lilli Kumar allegedly threw acid on them. A case under Sections 307, 148, 149 and 324 of the IPC was then registered against him and others at Boha police station. Fourteen persons had been injured in the clash that followed. A large number of followers of the dera have been repeatedly involved in attacks against the Sikhs because of the community’s objections to activities of the dera head who is already a rape and murder accused in a case being investigated by the CBI. The dera head had blatantly tried to imitate the Sikh gurus and has refused to apologise, rather making a mockery of such demands with half-apologies.