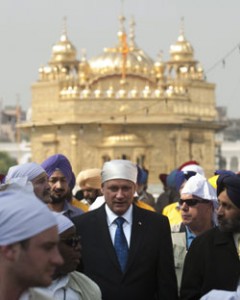 Amritsar, Punjab: Prime Minister Stephen Harper wrapped up his three-day visit to India Wednesday with a visit to the Sikh Golden Temple in Amritsar. Harper was surrounded by a massive crowd during the hectic visit to the temple, said CTV’s Graham Richardson, who is travelling with the prime minister. “There were thousands of people there thronging around the prime minister as he walked through the temple. You may remember that Jean Chretien did this in 2003 and it was quite out of control,” Richardson told CTV’s Canada AM.

Harper was surrounded by men in barefoot wearing orange robes, along with crowds of Indian camera operators and photographers as he visited the important Sikh religious site.

“You must cover your heads with scarves, remove your socks and shoes and walk through the temple,” Richardson said. “So there were some extraordinary scenes at the heart of the Sikh religion for millions of people this morning that Stephen Harper took a look at.”

Richardson said there are roughly one million people of Indian descent in Canada, many of them watching closely as Harper makes his first trip to India.

“From the prime minister’s perspective, to be able to see the things he’s seen — even on a short trip — and make connections and meet people like Prime Minister (Manhoman) Singh of India. It can be nothing but a success, for sure.”

Richardson said Harper’s communications staff has maintained their typical tight control on reporters travelling with the prime minister. A number of members of the Indo-Canadian media are travelling with Harper, and one was called forward on Harper’s plane recently, for an interview.

The reporter was asked to provide her questions ahead of time, and was told she couldn’t ask any questions about politics, Richardson said.

“I’ve covered politics for a long time and I’ve never actually heard of a prime minister, a premier or anyone else around them telling a reporter she couldn’t ask about politics,” Richardson said.

“It’s the typical story when this prime minister is on the road, this is how they run things and it’s been more of that for sure on this trip.”

Harper is expected to arrive back in Canada on Thursday.

Previous: Controversial Sikh preacher Darshan singh is summoned to Akal Takh Sahib
Next: Open Letter to Barak Obama Ahead of his Visit to India