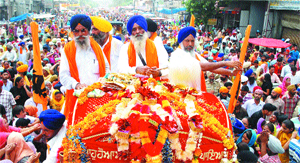 Gurdaspur, Punjab: Various religious organisations are busy in preparations for for three-day celebrations connected with the marriage of Guru Nanak Dev, first Guru of the Sikhs.

Devotees from across the country have descended on the town and paid obeisance in gurdwaras, built where the marriage ceremony of Guru Nanak Dev with Bibi Sulakhni is said to have taken place 522 years ago.

Devotees from Australia, Italy, Canada, England and Germany have also come in large numbers and are going from one gurdwara to another to pay obeisance. Women have been singing marriage songs in a traditional manner to welcome the baraat (marriage party).

The baraat of Guru Nanak Dev, which left Sultanpur Lodhi today morning in the shape of a nagar kirtan (religious procession) for this town from Ber Sahib Gurdwara of Sultanpur Lodhi, is expected to reach here late in the evening today.

Sucha Singh Langah, Punjab Agriculture Minister, Gurinder Pal Singh Gora and Kashmir Singh Bariarpur, both SGPC members, and Joginder Pal Singh Batala, senior SAD leader, with other residents are awaiting the arrival of the baraat at Ammo Nangal village to extend it a traditional welcome. Guru Nanak Dev married Bibi Sulakhni, daughter of Mul Chand, a Chona Khatri, in 1487 at Batala. The ceremonies were a grand affair as Bibi Sulakhni was the daughter of a revenue official. Guru Nanak Dev refused to follow marriage rituals dictated by Brahmins of that era. He and Bibi Sulakhni took four rounds of the sacred fire instead of the seven prescribed. Rajinder Singh, president, Satkartaria Sahib Gurdwara, said the marriage party would be staying in Satkartaria Sahib Gurdwara tonight. The baraat will be served traditional delicacies.

Kulwant Singh, manager, Kand Sahib Gurdwara, built at the place where the marriage party of Guru Nanak Dev was made to rest before the ceremonies, said two lakh devotees had come to the town so far.

People in large numbers reached here today to attend 522nd anniversary of marriage of Guru Nanak Dev, founder of Sikhism. The community kitchens were galore in the town and people regardless of religious affiliations organised these for devotees.

Langars (community kitchens) organised every where offered to devotees traditional food and sweets to mark the marriage anniversary of Guru Nanak Dev, known as Babe Da Viah. People from all walks of life were seen distributing eatables and gifts also among devotees.

Kulwant Singh, manager, Kand Sahib Gurdwara, said yesterday two lakh devotees paid obeisance in this gurdwara and the number of devotees, who had paid obeisance till 5 pm in the same place, had touched three lakh. He said 500 devotees would be baptised to mark the occasion of Babe Da Viah.

The barat (marriage party) of Guru Nanak Dev, who married Bibi Sulakhni, daughter of revenue official of this town more than 500 years ago, started in shape of Nagar Kirtan from Dera Sahib Gurdwara and passed from markets and popular spots of the town.

The Nagar Kirtan was led by palki (palanquin) and Panj Piaras (five beloved ones) halted at various gurdwaras. The residents of town showered flower petals on the procession from rooftops of their houses. The residents also tied sehra (bridegroom’s veil) with the Palki. The barat will return to Dera Sahib gurdwara late tonight.