Major Victory in Fight for Equality in US Army 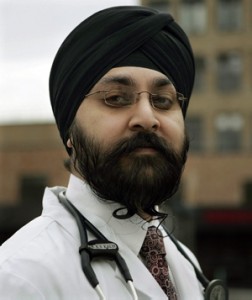 Washington: The U. S. Army announced today that it accepted a Sikh officer into its active forces.  The officer had sought an accommodation allowing him to maintain his religiously mandated turban and beard while serving his country. The Army’s decision is a major step towards ending a 23-year old policy that excludes Sikhs from service.

The Sikh officer, Captain Kamaljeet Singh Kalsi, a doctor, was recruited to join the Army’s Health Professions Scholarship Program several years ago.  He maintained his turban throughout his 8 years of medical education, which included specialized Army training, attendance at Army ceremonies and work in military medical facilities.

Nevertheless, after completing the program, he was told that he must remove his turbans and cut his unshorn hair to begin active duty.  Rather than abandon the requirements of his faith, he appealed to Army leadership to end its policy of excluding Sikhs from service.  Today the Army accepted his individual appeal.

“I am overjoyed by the Army’s decision to allow me to serve my country,” said Captain Kalsi.  “Like the many Sikhs who fought before me, I know I will serve America with honor and excellence.”

While today’s decision provides only a one-time accommodation for Captain Kalsi, Army leadership has affirmatively indicated a willingness to review the  general policy barring Sikhs from service. The decision lends hope to all those Sikhs who want to serve their country while observing their faith.

A number of prominent Members of Congress have called on the Army to welcome all Sikhs, and not just Captain Kalsi, into the military.  In August, 43  members of the House of Representatives and 6 U.S. Senators called on Defense Secretary Robert Gates to allow all Sikhs to serve in the U.S. Army. These  efforts were led by Senators Robert Menendez and Kirsten Gillibrand in the Senate and Representative Rodney Frelinghuysen and Carolyn Maloney in the
House.

“I am gratified that the Army has recognized Captain Kalsi’s commitment to his faith and his desire to serve our nation in uniform,” said Congressman Rodney Frelinghuysen.  “As our Army increasingly engages the world, our engagement is enhanced by having a military that reflects both America’s and the world’s diversity.”

Captain Kalsi was represented in his appeal by the law firm of McDermott Will & Emery LLP and the Sikh Coalition. McDermott filed the original appeal that  brought the current matter before the U.S. Army and led to today’s decision. McDermott and the Coalition also represent Captain Tejdeep Singh Rattan, a Sikh dentist who also filed an appeal requesting that he also be able to maintain his articles of faith.  The Army today deferred a decision in Captain Rattan’s matter until he completes his dental education.

“Throughout the past six months, we have steadfastly asserted that our clients’ religious requirements in no way hinder their ability to effectively
serve our nation,” said Amandeep S. Sidhu, McDermott’s lead counsel on this case.  “We are deeply impressed with the Army’s forward-thinking approach in allowing our client to serve with his turban and beard, and we now call upon the Army to consider amendments to its uniform policy that continues to close the doors to other Sikh Americans from serving in the U.S. Army.”

“We wholeheartedly applaud the Army’s decision today,” said Amardeep Singh, Program Director of the Sikh Coalition.  “Our experience on the frontlines of almost every major war the past 100 years makes crystal clear that Sikhs are effective and brave soldiers. Sikh inclusion in the Army not only helps the military understand the many faiths and cultures of America, but also the faiths and cultures of countries where we send soldiers into harm’s way.  We  look forward to the day when the Army finally welcomes the service of all Sikhs, not just Captain Kalsi.”

Tagged with: sikhs in army

Previous: Sikh Coalition mislead Sikhs in America?
Next: The battle for Brampton