Ludhiana, Punjab: There is no official figure of how many Sikhs killed or injured in Ludhiana Police and Sikh Sangat clash. Jagjit Singh is very worried man and so is his family. The reason – his 38-year-old brother, Swaran, who had gone out along with him, is still missing.

“My brother and I, along with his seven-year-old son, had gone along with the ‘Akhand Kirtaniya jatha’ to the Feruman Shaheeda gurdwara to protest against a congregation that was being held at the GLADA grounds on Chandigarh Road. Though my nephew and I came back home safe and sound yesterday, I don’t have any idea about where my brother might be,” said a worried Jagjit.

“We’ve been looking for him everywhere, praying he is safe, but have yet not been able to get a clue as to his whereabouts. “The last time I saw him yesterday was at Cheema Chowk when the police lobbed tear gas shells at a rampaging mob. After the crowd dispersed we got separated,” he added.

For the last 35 hours Jagjit has been frantically searching for his brother, hoping someone would disclose his whereabouts.

“My brother devotes most of his time in prayers and ‘kirtans’ and we thought he was probably busy helping those injured in the violence. However, his mobile has remained switched off”, says Jagjit. He added Swaran has two sons aged seven and four, along with a nine-year-old daughter and wife Simranjit Kaur waiting for him.

Suspecting the police might be involved in his disappearance, former SAD councillor Rajinder Singh Bhatia said, “We all fear the cops picked him up and will torture him. In fact many people have gone missing after yesterday’s clashes and this needs to be probed.”

Swaran is a resident of Azad Nagar and runs a confectionary shop to earn his livelihood.

Shaheed Bhai Darshan Singh shortly before he died. As seen in picture, Singhs were trying to help him.

Another Sikh on the ground. In this picture one Policeman seen helping him & shielding him but soon left him bleeding on ground. 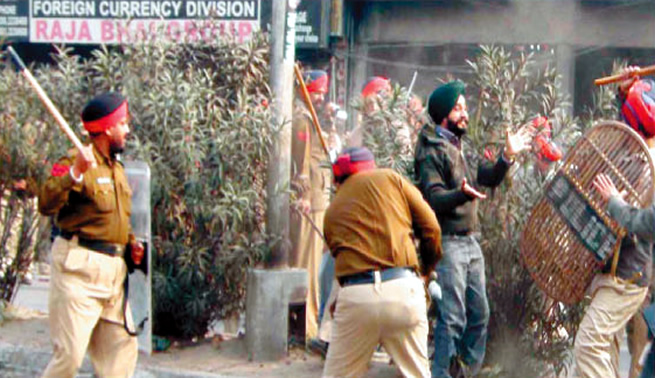 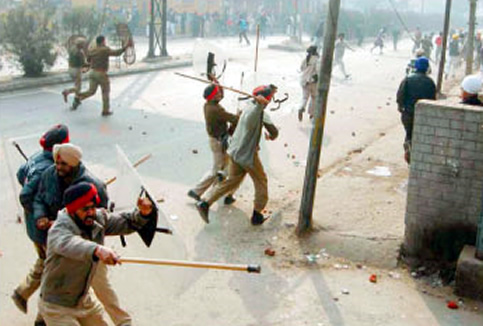 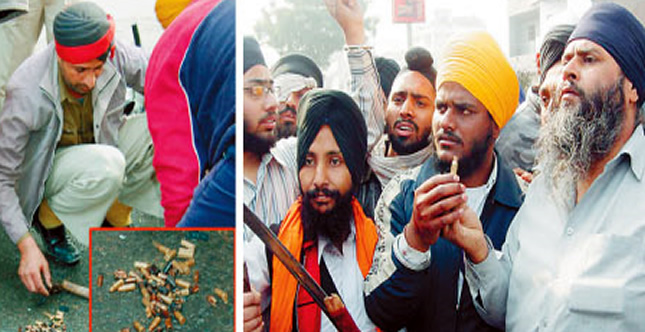 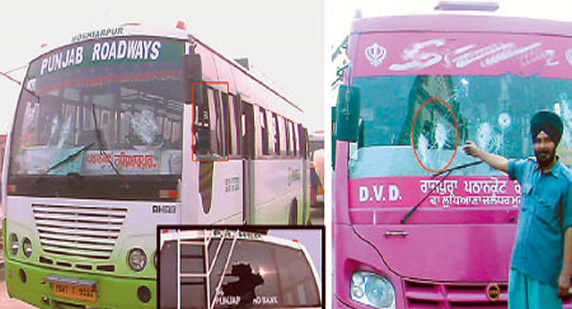 Police didn't fire in air but were aiming at protestors. Some bullets hit many public buses as seen above.

Previous: Punjab Police firing Sikh Victim cremated
Next: Voices for Freedom denounces violent attack by Panjab police on protesting Sikhs in Ludhiana. Warns the State of a Direction towards a Civil War.