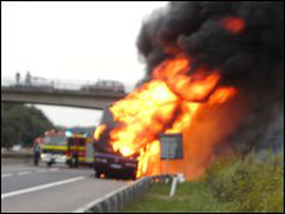 UK: Sikhs travelling back from an annual Sikh camp on a coach had to rescued by the fires services as their coach caught fire.

Most of the Sikh were from Bedfordshire and were returning on Friday evening, from Luton Gurdwara.

66 people on board, mostly women and children were helped to safety seconds before the coach bust into flames.

A police investigation is under way. The driver pulled onto the hard shoulder of the M3 at Basingstoke, Hampshire, when smoke began billowing from the double-decker coach.

Luton-based coach company, Premier Travel, said it was carrying out an investigation with the Vehicle Inspectorate.

The group stayed on the hard shoulder, wrapped in foil blankets, until another coach was sent to collect them.

The Confederation of Passenger Transport UK released a statement on behalf of the coach company.

Spokesman Christopher Nice said: “The quick thinking and professionalism shown by our driver enabled all of the 66 passengers onboard to be promptly evacuated from the vehicle and led to a safe location.

“We praise our driver for not only safely and expertly evacuating the passengers from the coach, but also making sure that other road users were not placed at any risk.”

Around 25 firefighters from Hampshire Fire and Rescue Service attended at 1930 BST and worked for an hour and a half to put out the fire.