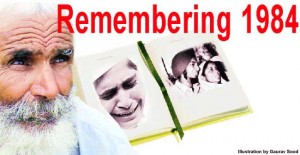 New Delhi, India: A trial court on Tuesday dismissed the CBI’s contention that it was not under a metropolitan magistrate’s jurisdiction to decide on the agency’s probe report giving clean chit to former Union minister Jagdish Tytler in the 1984 anti-Sikh riots case.

After almost five months of gruelling arguments with CBI questioning the jurisdiction of a magisterial court on deciding the matter, additional chief metropolitan magistrate (ACMM) Rakesh Pandit, in his order, decided to hear the closure report on September 23.

Not convinced with CBI’s arguments in which they had sought the transfer of the matter to a sessions court, ACMM Pandit said, “This court can take cognizance of the offence exclusively triable by the court of sessions and then can summon the accused who are mentioned in the chargesheet as well as those who are not mentioned therein if it appears to the court that they have also done the offence.”

CBI, which had on April 2 sought to close the case against Tytler claiming there was no sufficient evidence against him, claimed that the matter involved the offence of murder thereby making it exclusively triable by a sessions court.

The alleged role of Tytler in a case related to killing of three persons on November 1, 1984, in the aftermath of the then Prime Minister Indira Gandhi’s assassination was reinvestigated by CBI after a court had earlier refused to accept a closure report against him in December, 2007.

The court, which is likely to take up the closure report for hearing on September 23, would now have all the powers to either accept CBI’s closure report or reject it and can even issue summons against Tytler as mentioned by it in its nine-page order.

Citing various High Court and Supreme Court’s judgment, the court referred to the CPC to conclude that “this court can take cognizance of any offence. The word `any’ has been used (in Section 190) to include even those offences which are exclusively triable by the court of sessions.”

During the arguments on the matter, the riot victims’ counsel Rebecca M John had earlier contended that a magistrate only takes cognizance of all offences, whether triable by it or not. “The metropolitan magistrate has the power and the right to accept an investigation report, or reject it, and take cognizance of the offence and can decide which accused to summon,” John argued in the court, terming as “fallacious” CBI’s plea that the magistrate did not have the power to decide on its investigation report.

The case allegedly involving Tytler relates to an incident on November 1, 1984, when a mob had set afire Gurdwara Pulbangash in north Delhi, killing three persons Badal Singh, Thakur Singh and Gurcharan Singh. The CBI had given a clean chit to Tytler in the case and sought prosecution of co-accused Suresh Kumar Panewala for the offence of murder.