100 Villages of punjab all set to have underground sewage system

Comments Off on 100 Villages of punjab all set to have underground sewage system 1,693 Views 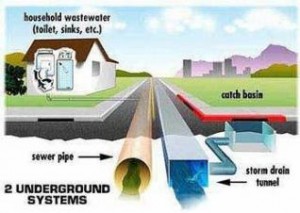 Chandigarh, Punjab: Over 100 villages of Punjab are set to have underground Sewage system, to free the rural population from the menace of open defecation and open overflowing stinking drains.

Punjab Government has instructed to cover all villages of religious importance first under this programme and a humble beginning is being made from Baba Bakala,  the ‘Tapo Bhumi’ of Ninth Sikh Guru Sri Guru Teg Bahadur Sahib and  Holy village Khadoor Sahib, a holy land visited by eight Sikh Gurus.

Reviewing the working of Rs. 1280 Crores Rural Water Supply and Sanitation programme, Punjab Govt emphasized that quality control would be the touch stone and any smugness would not be tolerated at any cost.

It was informed in the meeting that Rs. 4.9 crore has already been sanctioned for underground Sewage Scheme for Baba Bakala. It was informed in the meeting that land for sewage treatment plant has been provided free of cost by the Gram Panchayat and It will take about 12 months to complete the work of underground sewerage and treatment plant in Baba Bakala, to benefit 10,000 residents of the village  having 1278 General Category Household and 350 S.C. household. Over 30,200 metre of sewerage pipe would connect all the houses of the village and a Sewage Treatment Plant of 850 Kld capacity based on low power consuming Stabilization Pond technology to treat the raw sewage would be set up in the village. Separately, Rs. 66 lac has already been sanctioned for water supply augmentation in Baba Bakala and tenders have already been invited for this work.

The Deputy Chief Minister was informed that for Sri Khadoor Sahib, 21,000 meter underground sewage pipe would be laid to connect all houses of the village at the cost of Rs. 3.09 crores. The sewage pipe would be linked to a modern Sewage Treatment Plant of 1200 Kilo liters daily(kld) capacity based on low power consuming Stabilization Pond technology to treat the raw sewage. It was informed that after treatment, the treated tertiary water will be discharged in the nearby drain that could be used for irrigation purposes.  He said that the residual solid waste after proper treatment by composting would be used as organic manure by the farmers of the village.

The sewerage system in Sri Khadoor Sahib would serve 11038 population having 1347 general households and 861 Scheduled Caste household. It may be added that village Khadoor Sahib was already getting 70 liter per capita potable water under the Scheme of NABARD.