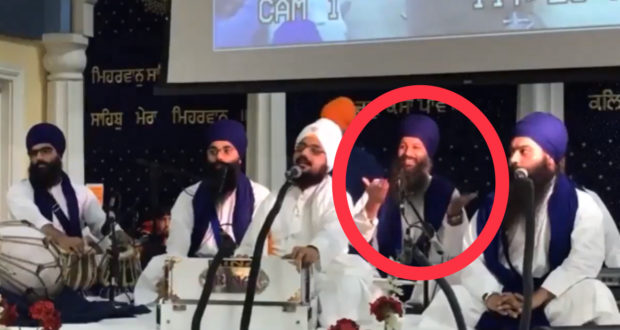 Who started the fight at San Jose Sikh Temple

Comments Off on Who started the fight at San Jose Sikh Temple 9,060 Views

A man who tried to take out Kirpan. He was sitting close to Ranjit Dhadreanwala.

The brawl that happened last week at San Jose Sikh Temple brought shame to the flourishing Sikh community of Bay Area. California Sikh Sangat was first confused and then angry at this event. Sangat wants to know what happened and this is our attempt to provide the facts to the general public in a non-biased true non-paid journalism. 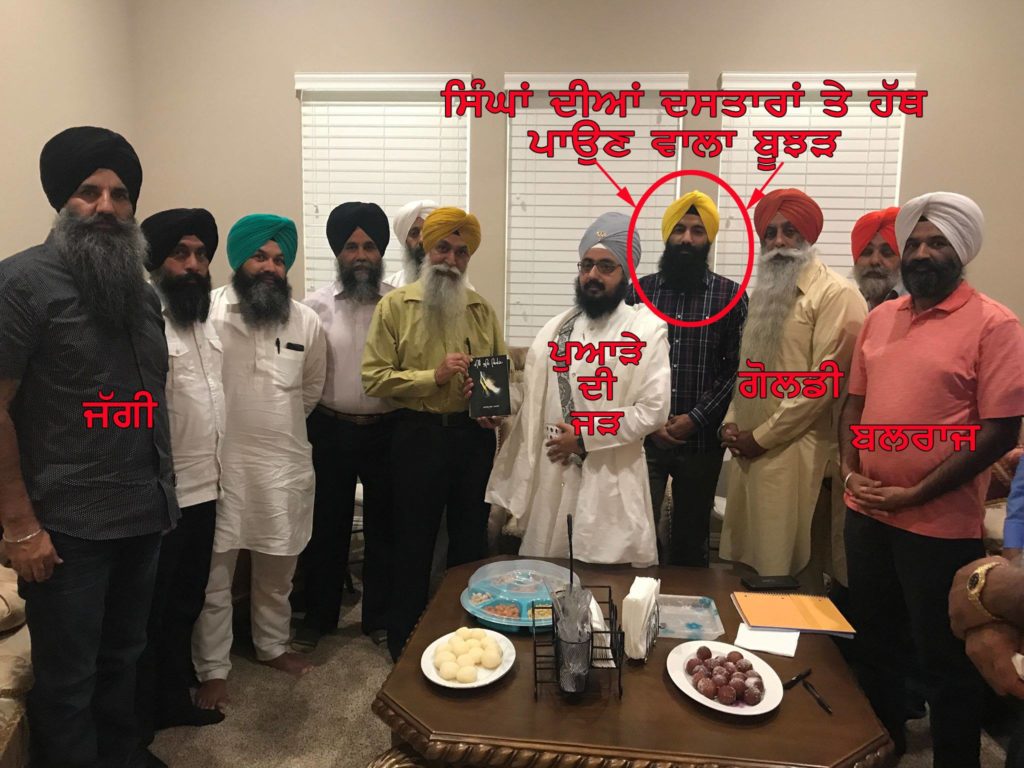 This picture was download as-is from social network. In this picture you can see all missionaries gathered.

Baba Ranjit Singh Dhadrianwale recently joined hands with Sikhi prachar based on the ideology of Sikh missionary. Head of Dera Sacha Sauda is in jail because of his rape cases but he is also behind the desecration of Sikh guru and holy scripture, Sri Guru Granth Sahib. Panthpreet Singh (Ramesh Kumar) name is also associated with the beadbi cases. Unconfirmed sources say that Panthpreet along with two arrested youth were responsible for beadbi cases. Baba Dhadrianwale is a close friend of Panthpreet. Sikhs are holding grudges against them for doing beadbi of their holy scriptures.

San Jose Management has always held Baba Dhadrianwala’s program on his tour to the US. Sources from India say that Baba Dhadrianwala’s visa got rejected by US Embassy in Delhi due to his recent violent diwans. One of the California Gurdwara Sahib from Bay Area however convinced US House of Representatives to help re-issuing the visa for Baba. He was issued the visa on his second attempt.

As per sources, Dhadrianwala refused and the Gurdwara Sahib management conveyed that message to the sangat but at the same time management kept saying that they will call and let sangat know when and where to come and talk with Dhadrianwala. It is worth mentioning here that the management stated that they need to hold these diwans in order to make some money since these are the only times when the hall gets full to the capacity (video source is available but not posted).

Not getting a straight answer, sangat decided to come on Friday evening diwan. Upon entrance, some of them were asked to show ID. Sangat sat inside the diwan hall. The sangat was sitting in a peacefull manner when the members of the San Jose management started pushing, hitting and kicking sangat. Even Dhadrianwale seems to be saying on speaker, “Let them remain seated. Don’t do like this.”

There was a huge brawl with the management team trying to hit and harm the anti-Dhadrianwale group of sangat to make them leave the Gurdwara hall. Hired Security personnel were already present in the hall and were working on the directions of the management. Security Cameras displaying footage on the big projector screen at the back of the stage zoomed in on the brawl to highlight it and to intimidate the sangat.

Dhadrianwale supporters were seen taking out kirpans. Dhadrianwale’s right hand man sitting at his back on the stage can be seen laughing and encouraging the event by raising his both hands with a smile.

The most unfortunate part of this whole incident was that police was called in and two officers entered the darbar hall with shoes on and uncovered heads. Although a fight should never have happened, both parties were at fault for keeping it inside the darbar hall, and bringing the need to get the police involved. This is very disrespectful towards the Guru Sahib. 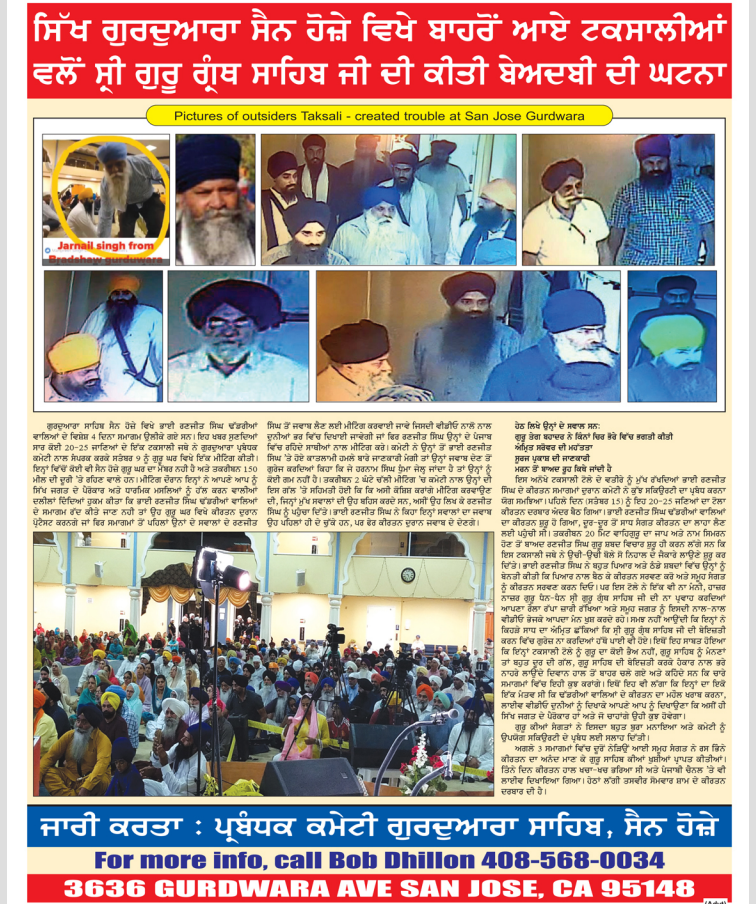 A full page advertisement was given in newspapers officially by posting images of sangat from their security cameras from the time of the meeting. They even posted the headshots of some Gursikhs and blamed them for starting the fight without any verification. Wasting thousands of sangats’ money on security and newspaper ad, they could have simply resolve by a simple demand of a meeting with foreign preacher.

Gurdwara Management has more responsibility to keep peace where they reside. It was not very far when the neighbors of San Jose Sikh Temple fought for many years opposing the construction due to these very similar reasons. Nobody wants their peace to be disturbed and specially due to someone who is not even resident of United States. Such issues can be easily solved by having public meetings with both sides to air their thoughts/opinions. Gurdwara Management should learn a lesson from this event and they should consider issuing a public apology to sangat rather than instigating more fights by posting tribal mindset newspaper advertisement.

Source – Article compiled after several interviews from the attendees. If anyone wants to express their opinions or reply, then please contact us.

Past Controversies of Ranjit Dhadreanwala

Previous: Register for the International Sikh Research Conference
Next: Special lecture: Sikh Arms and Armour in the Royal Collection report