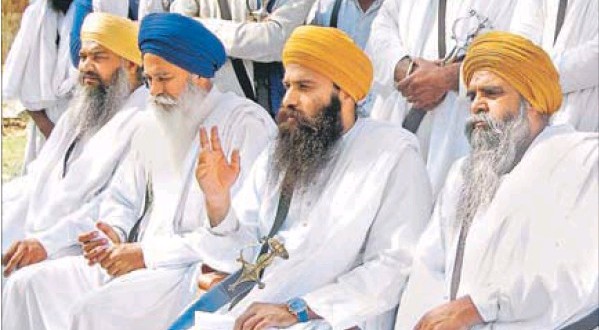 Bathinda, Punjab: Panthic organisations and political parties, which held the Sarbat Khalsa at Chabba village in Amritsar on November 10 last year, will announce their next course of action on the issue of desecration of ‘birs’ of Guru Granth Sahib and the date of holding the next Sarbat Khalsa during the Baisakhi political conference at Talwandi Sabo on April 13.

Addressing a press conference here on Monday, preacher Baljit Singh Daduwal said that besides the organisations and political parties who had held the Sarbat Khalsa last year, people from any other political party could also take part in their political conference except the members of Badal and Majithia families.

He said they would announce the date of the next Sarbat Khalsa and the next course of action on the issue of desecration of Guru Granth Sahib as neither the perpetrators of desecration at Bargari had been nabbed nor had any action been taken against the guilty cops who opened fire on protesters at Behbal Kalan in Faridkot district, resulting in the death of two persons in October last year.

Last year, the Panthic organisations and radical political parties had announced to hold the next Sarbat Khalsa on the occasion of Baisakhi at Talwandi Sabo but it was postponed. Daduwal said the Sarbat Khalsa could not be organised on Baisakhi as majority of the leaders and preachers, who organised the Sarbat Khalsa last year, were lodged in jail for a considerable time or were still in jail.

2016-04-12
SSNews
Previous: Badal’s and their Delhi acolytes desperate to malign Kejriwal
Next: Sikh Celebrations with Prime Minister of Canada